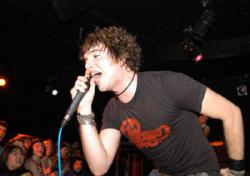 Hot Hot Hot or Not Not Not?

Liz and I missed the Hot Hot Heat 21+ show at Graceland last week for the Cutest Band in Seattle contest. This meant I was headed to my first Vera Project (all-ages) show in order to see them. Sadly, Liz — who LOVES Hot Hot Heat, who has endlessly played Make Up the Break Down and shared it with all her friends — Liz missed Hot Hot Heat because she was out of town.

Oh Goddamnit! (and no, that joke will never get old, so stop asking).

But many of us were on hand for the show: some fans, some super fans… and some non-believers. The legitimacy of the phenomenon known as Hot Hot Heat has been debated widely of late, with indie-greats Pitchfork.com calling them, "…insistent, poppy music superbly summarizing most of the melodic states punk rock has evolved through since its invention," while Canada's Discorder.com offered the dismissive, "I was amazed at how much people give a shit about bad perms and tight pants." Even our own igLiz has publicly deemed that they have a, "Flair for the oddly unexplored rhelm between dissonance and Disney, with a thank you nod to Interpol original dirivity." Yes, she really talks like that.

This… erm, heated discussion has been on-going in our imaginary circle of friends of late, and culminated at Friday's show, with flames rising on both sides.

To this end, we've decided to host our first Imaginary Round Table Discussion: Hot Hot Heat: are they Hot or Not? Discuss.

Imaginary Liz
(who was out of town the night of the show, but still has a thing or two to say…)

Here they were in my town, twice in two weeks, and I miss them both times! Good thing that everyone I've shared the CD with has since told me how awesome they were live. Yep, good thing everybody else has seen them live. That's sure good.

I am thankful that they're at least *kind of* local boys, so hopefully they will have reason to come back soon. Like to play "Oh Goddamnit" for me. Five times in a row. Summer, honorary imaginary all-ages correspondent The crowd at Hot Hot Heat was Hot Hot Hot. I've never seen such good looking indie-kids. I LOVE Hot Hot Heat!!!!!

I heard the influence of Elvis Costello, the Cure, early Depeche Mode, and maybe even Kajagoogoo (it's the voice, man!), but with a crunchier, stompi-er, under-current and catchy well-constructed piano and guitar melodies that reminded me that, despite what a lot of the press has said about this band, it HASN'T all been done before. Pay closer attention (or just check out their t-shirt) and you can feel that this band also has a soft spot for good old mod/garage rock. That gets you triple bonus points with me, lads. {Read Steve's full review of the show.}

Ben Clark, singer and guitarist for the Lashes
(who wasn't actually at the show, but who had a opinion or two to share when I ran into him later that night at the Pretty Girls Make Graves show. So I paraphrase…)

Hot Hot Heat was my favorite CD last year. It's like a greatest hits collection from both the Cure and Dexy's Midnight Runners, only there's nothing depressing on it! It's only the really good fun songs.

Hot Hot Heat. What could be a more obvious modifier for the word "heat" than… hot? And not only is the adjective overt, but it's also redundant: in case you're not sure it's hot, let them reassure you it is. Twice. Hot Hot Heat. This band is not trying to trick you, or make you think too hard. There's nothing subversive or subtle about this band. It's in your face. It's familiar. And Oh Goddamnit, it's FUN. Really fun!

I also heard some of the most hooky and melodic punk-pop I've ever heard, and I couldn't stand still. Are they affected? Sure. More than once I heard front man Steve Bays assume a false British accent. I'm sure those guys spend more time on their hair in one night than I do in a month {aside: am I the only person who thinks lead singer looks like he could have been in the Bay City Rollers? Anyone?}. But if you can't just admit these are catchy songs, and that they put on a kick-ass show, well, then you're just a monster and I don't want to be your friend.

Think about boxed mac and cheese (Kraft for the more traditional, Annies for you co-op folks). It's not the finest of culinary adventures, but even those with the most sophisticated of palates occasionally must crave a bite of those chewy delicious tubular noodles and that powdery cheesy goodness. Admit it. It's impossible not to like it. Sure, the homemade stuff might be more sophisticated, and has finer ingredients. But sometimes that boxed stuff… it's so familiar, so tasty, so GOOD.

So just shut up and eat it.