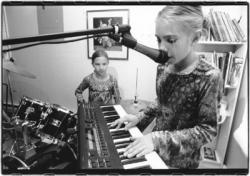 Smoosh at the Showbox

Surely by now you've heard of Smoosh {drums} and — the indie-rock duo consisting of sisters (ChloeAsya {keyboard, vocals}), aged nine and eleven. Since forming two years ago, Smoosh has shared the stage with an impressive lineup of local favorites — including Dub Narcotic Sound System, Operation Makeout, the Glasses, Amy Blaschke, and Schoolyard Heroes — and have even played live on KEXP. That's an impressive lineup for any local band, let alone one populated with members who were born while grunge was "breaking." I was eager to hear them perform live, and definitely curious to see how they'd react to playing in front of a huge crowd as the openers for Nada Surf and Death Cab for Cutie.

Once they took the stage, I must confess my latent {ahem, very, very latent} maternal instincts welled with some bizarro quasi-parental sort of pride. I felt this strange sense of joy while watching them tear it up to a full all-ages house at the Showbox. Look at those girls go! Their parents must be bawling with excitement!! I want to have indie-rocker kids!!!

But Smoosh didn't need my misplaced wonky grown-up "awww" sentimentality. This wasn't any schlocky school play; it wasn't the sheer adorability factor that carried the girls — though Lordy knows they were cute. Personally, I find cute tends to topple to cloying in approximately twenty-seven seconds.

Not so with Smoosh. Smoosh is no gimmick. The girls write and play REALLY GOOD songs, with catchy-cute melodies, sophisticated timing changes, sweet vocals, and super-skilled musical prowess. Asya's sophisticated work on the keys carried melody on the one hand and a nearly bass-sounding rhythm on the other, while Chloe smashed that high hat and carried the joyful backbone of each song with skills that exceeded those of many drummers three times her age.

My reaction quickly progressed from adoration to admiration as they made their way through their 40 minute set of piano-driven, poppy, oh-so likeable songs. The crowd responded in kind, cheering them on and rocking out. You could hear the buzz echoing through the room as the set progressed: "They're how old? Wow, they're great!"

I was likewise captivated by their confidence. Most nine-year-olds would be terrified to speak two lines in a school play; many adolescent girls seek to be "normal," to blend in, to gain acceptance.

Smoosh rocked and charmed the crowd, maintaining a composure that was equal parts childlike innocence and a grown-up professionalism that far exceeded their years. They felt bonafide. There was no pandering to the crowd, no insipid reliance on how cute they were, and none of that awful practiced Hollywood/beauty pageant preening so often seen with child starlets. Smoosh seem like normal, nice kids. If I ever have a child, I'd love for one of them to come over and babysit. I bet they get good grades and have lots of friends, and that their parents have really good CD collections.

In a world of bobo "girl-power" extolling conflicting values and offering piss-poor (a la Britney) role models for girls, it was beyond refreshing to watch these amazingly talented kids having fun and rocking out, while still remaining kids. Personally, we were disappointed the merch table had no Smoosh CDs or t-shirts to take home.

The question that remains: where do you go when you've already opened for Death Cab for Cutie at the age of nine…?

Perhaps you have Death Cab for Cutie opening for you by the time you're nineteen…?