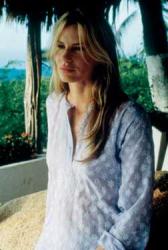 Waiting. There's a lot of it going on in indie god John Sayles' latest, an absorbing little drama about six American women visiting an unnamed South American city and twiddlin' their thumbs until an adoptable baby pops out of some poverty-stricken mama. Potential adoptive parents tend to congregate at a hotel referred to by locals as Casa de los Babys, and some folks remain here for two months or longer while the legal and bureaucratic processes are in flux. Stasis becomes their way of life.

Not that it's much different for some of the permanent residents of this Latin mini-tropolis. Enigmatic hotel owner Rita Moreno (when has she not been fabulous?) also puts up with a lot — nagging employees, a radical leftist son, hard memories of an asshole ex… not to mention this constant gaggle of demanding yanqui women.

And Sayles always manages to get wonderful performances from his actresses. Here Marcia Gay Harden is the standout as a crass, obnoxious bitch (with some big-time sense-of-entitlement issues) who steals from maids' carts, bribes a lawyer, and incessantly makes racist comments (with varying degrees of subtlety and tact) about the townsfolk. We all know someone like her, but only John Sayles could make such a prototype so vivid.

Arkansan Mary Steenburgen is also wow-worthy as a gentle (but secretly alcoholic) bible-thumper, Lili Taylor's in fine familiar form as a tough New Yorker, and hot (yes, even I think so) Daryl Hannah and Maggie Gyllenhaal deal with infertility issues.

It's all very moving, even when it fails to pack the emotional punch of a Matewan or even a Passion Fish. No one but ever-lefty Sayles can provide such unique and insightful takes on the concept of community — see the superior Lone Star or Sunshine State for proof.

And we mustn't fail to note the auteur's awe-inspiring writing, which often culminates with one gorgeous dialogue played out in a lengthy scene in which a character, for whatever reason, isn't quite heard. Here it's Irish-American Susan Lynch speaking to a hotel maid (startlingly great Vanessa Martinez) about motherhood and tenderness and the idealism of familial dreams. It's a very poignant, very Saylesian contrast of cultural attitudes: neither woman can understand the other's words, but their heartstrings play the same devastating tune.