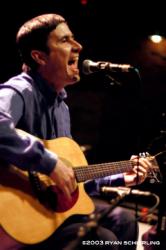 So, in case such a report hasn't been written yet, I will proceed with a restrained version of the most instinctive course of action. Rather than present each of you with several typewritten, double spaced, generously-margin'd pages, I have flushed out my argument into a five paragraph essay format analysis. As per the 5PP guidelines, I will expand on critical points and, by my final paragraph, prove my hypothesis… "The Mountain Goats are better than your Mom."

Introductory Paragraph:
Up until the most recent years, The Mountain Goats was actually one man… John Darnielle. On this tour, as with on the album Tallahassee he is joined by multi-instrumentalist and longtime friend Peter Hughes. Both men are markedly interesting, quick-witted, disarming, and have an expansive knowledge of everything from the Rocky Horror Picture Show to where to order quality chili-peppers on-line.

Over the the course of 30 releases {7"s, EPs, cassettes, 10"s, full-length albums} in twelve years, John has crafted songs that stand alone as complete necessities. And to experience them live, his landscape of personality enables him flawlessly perform the most intricate of acoustic guitar parts while spewing lyrical webs. Each word poised purposely… each guitar chord strummed with the intensity that it could be his last.

Second Supporting Paragraph:
With each verse, he jerked and recoiled within the confines of the office chair he occupied. He exposed the characters of each song with such sincerity that you cheer them on and hope for "Where are they now" reunions. And, between each song, he fills empty space with mile-a-minute banter chock full of facts about the song and self-depricating jokes. His got the moxie and knows how to use it.

Third Supporting Paragraph:
To even attempt to recount a portion of the show would be a disservice to all involved. But I can adequatly report that he mainly focused on songs from the most recent albums, and, be still my heart, he finally succumbed to pressure from the crowd and played "The Best Ever Death Metal Band in Denton".

But, the final and most convincing point of discussion about the Mountain Goats/John Darnielle… the thing that truly makes the Mountain Goats better than your Mom is the fact that they are not only deep- down- to- the- core- superfans themselves who let their obsessions inspire and drive them — but also that they absolutely see the ludicracy in their compulsion — which drives the obsessions even more. It's the beautiful cycle of not taking it all too seriously… yet treating it like it is the most important thing in the world. Really, isn't finding the perfect vinyl more important than mowing the front lawn or taking out the trash?