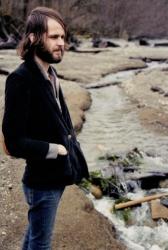 A thunder overture preceded the show, calling all wanderers inside to hear Drew Victor play at the Green Room on a galing Tuesday night. Coming in with rain in my shoes and ears ringing, I was ready for some warm mellow troubadour songs to evaporate the touch of the storm. Down there in the veridian salon, I was not disappointed.

Finding a small group of listeners gathered in the low-ceilinged space, I sat down to hear Brenda Weiler open the show with her blue guitar. Recently transplanted from Minneapolis to Portland, the impression one gets from Brenda's songs is that the road behind her is littered with shattered fragments and torn skin. The evident strain throughout her set was endearing, if overstayed. The "motherless child far from home" (as she sang in the second song) urgently communicates her pain but in vocal stylings that never stray from one piece to the next, leaving the indentation of a prolonged, unbroken throb.

While these sensations were not as warm as I anticipated, my shoes grew cold until Drew Victor took the stage. He is a friend and I've seen him perform before; those previous offerings were burnished with melodic gold. Tonight, however, was a glittering furnace that left the past a melted trove.

The combined spirits of Jeff Buckley and Bright Eyes hover around Drew and linger in his voicebox. Fortunately he is discontent with leaving his talent as mere homage and has successfully built a unique combination out of these influences and his own unmatched gifts. To hear one of his stories -really, they are not so much songs as accounts- is an aural equivalent to a flock of suddenly spiking birds aroused into the air from a cable; they come on that blue, out from a corner, and vibrate through your body. There is a slow approach, then at once you are engulfed, the violent motion surrounding you, until the agitation passes and leaves an exasperated and cleansed wake, something a little darker left behind.

Victor's midnight croon anticipates red skies at morning, as if he sees what is to come. This doesn't slow him down or disparage the connectiveness of his songs. He relates the strands and barriers equally that life brings, the people that manifest them for us, as well as the places we stop, start, or just carry on. It is all invigorating and reason for faith. As he sings about "wanting the seasons to flow through my veins", the words are not posed or perfumed; they are admitted with a gorgeously controlled tenor that just can't hide itself.

The lyric he puts down is the warmest of Victor's offerings. When he deconstructs "I took a part" in one of his songs, it conveys artifice borne of heat, a moment of inspiration. Throughout his stories these kind of inventions thrive and add invaluable dimension to the music.

Present on-stage was not only Victor, but his cohort musicians as well. Known as "passing friends" (an unfortunate tag), Joe on drums and Bennett on sax rounded out a tight ensemble. All three were clearly comfortable with each other and, when they harmonised delicately at many points in the night, it was a chorus of friends. That feeling spread in the room, as if we were sitting in front of fireplace. Taking that metaphor even further, they really burned the place up.

I left at the end of the set feeling satisfactorily confronted and warmed, my shoes finally exhumed of the torrent from earlier. Walking away, I knew there would be better shows in the future. This wasn't the apex of Victor's career, not by a long shot. You could see it in his stride that this was just the opening bid of a long and fruitful journey. Good for him; what's more, better for us.