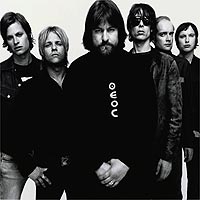 The Soundtrack of Our Lives, and Cato Salsa Experience

As with any fine evening, my Imaginary Boy in Tow (embracey) and I met up for drinks before heading over to the Graceland.

Over our regular drinks (my mandarin, soda w/ lime and embracey's so co and coke), we felt a charge of Scandinavia in the air.

"I haven't felt this Ikea-rific since Lena Olin became a regular on Alias!" he drolly emoted, thoughts of Ingmar Bergman obviously racing through his head. "If I weren't vegetarian, I'd be tearin' up some Swedish meatballs, ok?"

You see, Soundtrack of Our Lives was in da house. Da house being da Mars Bar.

Within minutes we were introduced to a fellow we will call Björn (because we didn't catch his name).

He was the keyboard player for the band and by the end of our first drink, was quite the people person. With looks somewhere between a younger, better, non-metal Sebastian Bach and an amiable Draco Malfoy, he proceeded to be the approachable rock star we all hope to meet someday. The packed tour schedule, the T in the Park gig, and the disturbingly flat drive through Kansas are the topics we can remember now. (I didn't say that we only had one of our regular drinks.)

When Björn reminded us of the quickly approaching Cato Salsa Experience start time (told you he was amiable), we grabbed our coats and headed toward the door, quickly glancing at the TSOOL tour poster on the wall. "Wait… where is Björn in the line-up?" I wondered aloud as the chill night wind brought a hint of sobriety back to this quickly-sousing imaginary girl. Evidentially, that chill wind crosses gender because I heard a familiar "What the fuck?! " behind me. "That bitch was just a roadie," groused embracey, obviously much less perturbed than he was letting on.

"But he was so amiable, " we both said in unison, and continued toward our destination.

With Björn's assistance, we arrived in plenty of time to grab another drink (damn that sobering chill wind) and claim a front and center spot for the Cato Salsa Experience portion of the evening.

As you can see from this year's top 3's list, the most recent CSE album ROCKS. I mean, ROCKS in the most organic of rock albums ROCKS. A 1970's hybrid of Hives ROCK and (oh I am scared to say this) Led Zeppelin ROCK. Fists in the air, long-hair-head-thrashing ROCK.

Once they hit the stage, there was very little time for a breath of air. Their breaks between songs were minimal or non-existant and the amps (even the orange one) never turned down below 9.75. They nodded to the aforementioned musical influences in both style and content, but what embracey and I remember most about the performance was the second button on the drummers shirt. Embracey?

"Listen, I'm not usually one to go for blonds, but the drummer is utterly adorable. And when that second button popped open. Oh Liz. That Viking can pillage my land any day."

Right. I'm telling you, that button had a mind of its own. When he came out, he was fully clothed. The energy of the music transcended the laws of physics.

And, by the time we had finished off the ice in our beverage holders, the compact Graceland stage was empty yet again, as were our glasses… but not for long.

The Soundtrack of Our Lives. Oye.

Embracey's recollection of the opening moments: "That mystical lead-singer dude (aka Ebbot Lundberg) bursting onto the stage with a presence that wasn't just about the awesome sound. He radiated a theatricality, an aura of peace and control all at once."

I couldn't agree more. We were transfixed. I'd heard that they were amazing and had witnessed a portion of their magic when I saw them at T in the Park (but the daylight and the fact that I was 5.8 km away from the stage diluted their panache), but had no idea that a large, sweaty man in a black cloak could sing with such delicate force, such raw emotion. More than transfixed, we were speechless.

The band created a grandiose atmosphere worthy of such a performer. Enveloping the room in a sound as sweeping and playful and transporting and LOUD as the latest epic at the Cinerama, the performance came dangerously close to a religious experience.

And guess who helped create it? That's right, our roadie! Björn was on stage! A fellow Björn admirer pointed out to us that he was supplementing the regular group on this particular tour. Playing the most critical and intricate of chords and movements with the unassuming humility that we had come to expect of our Björn, the performance wasn't at all what you'd expect of an "unofficial" Soundtracker.

By the forth song, embracey was finally able to collect his thoughts enough to note a striking resemblance between Lundberg and a certain Harry Potter character. "I'm surprised to learn that Hagrid's Swedish! Good to know that Dumbledore lets him out of Hogwarts once in a while to play."

While my Imaginary Boy spent the second half of the show spellbound by guitarist Ian Person's treasure trail ("I'm placing a special order for him next time I'm at IKEA"), I kept thinking about all the great music coming from that part of Europe. Röyksopp from Norway, Sigur Rós from Iceland, the Hives, Soundtrack and Sondre Lerche from Sweden. I love me some Scandinavia!