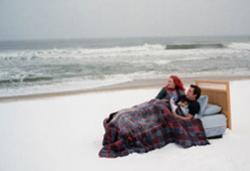 Eternal Sunshine on the Spotless Mind

I am not a fan of most Jim Carrey movies. The Truman Show and Man on the Moon were good. But The Mask? A task. Dumb and Dumber? Done and doner. The Grinch? Made my ass-cheeks clinch.

Mr. Carrey's latest, Eternal Sunshine of the Spotless Mind, happens to be the best new film I've seen this year. But let's attribute success where it's due: to screenwriter Charlie Kaufman (Adaptation, Being John Malkovich) and director Michel Gondry (music videos for Björk's "Jóga" and "Hyperballad", and The White Stripes' "Fell in Love With a Girl", to name a few). Their fantastic new film is a beautiful, riveting head-trip (quite literally), with hardly a glimpse of the star's usual puerile "comedy".

Recently-heartbroken Joel (a restrained Carrey) learns that his ex-girlfriend Clementine (punkishly ebullient Kate Winslet, doing her best work since Heavenly Creatures) has taken part in an experimental procedure which effectively washed her brain clean of their shattered relationship. Oddly detached Dr. Mierzwiak (Tom Wilkinson) agrees to perform the procedure on Joel as well, and most of the film's action takes place during the overnight hours in which Mierzwiak's geek-chic posse of assistants (Mark Ruffalo, Elijah Wood, and Kirsten Dunst, all excellent) put Joel through erasure.

The setting of Joel's psyche (he's drugged asleep, yet still experiences the procedure in real time) is completely fascinating, with the real and the surreal melding in awe-inspiring concoctions of mad visions. Joel and Clementine wander and dash through ever-deteriorating landscapes: apartments crossed with beachfronts, larger-than-life Alice in Wonderland kitchens, bookstores with vanishing titles and revealingly enigmatic patrons. Director Gondry (seeming more and more like a French Spike Jonze) is an extraordinary visualist, and he executes these unmoored scenarios with wonderfully subtle (mostly low-tech) manipulations of lighting, camera placement, and set changes.

But it's Kaufman's humane, brainy, mature love story that provides the narrative backbone. The Nietzschean theme of repeated cycles is explored, and there's definitely some "eternal recurrence of the same" in store for Joel and Clementine, as well as for Mierzwiak and his crew. Their pasts and presents, both real and imagined, are an absolute thrill to experience.

And Jim Carrey doesn’t talk with his butt one single time.