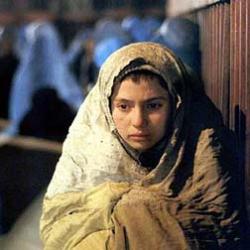 "People always believe their own eyes."

Osama is a film intensely aware, at times perhaps too aware, of its place in history. The first film produced in Afghanistan since the fall of the Taliban, it aims to be a document of the hardships faced under that repressive regime.

The story here involves a 12-year-old girl (none of the characters are given names) forced by her mother to impersonate a boy so that she can work to help support her impoverished family. This becomes necessary due to the fact that all of the males in the family have been killed in one war or another — a situation, the film suggests, all too normal in this country.

The first half-hour or so of Osama is enthralling. The film opens with a demonstration of Burqa-clad women demanding work. This section is shot from the POV of an American cameraman and ends with the Taliban, who arrive to break-up the protest, beating the camera into submission. This provocative act, vicariously attacking the audience, promises a confrontational style not followed up on by director Siddiq Barmak's relatively understated style. As the next several minutes introduce us to the film's central family, Barmak effectively and subtly conveys the omnipresent menace of the Taliban by portraying them merely as offscreen voices that burst in on the characters unannounced. There is an undeniable tension here uncharacteristic of Hollywood films, where we always know that everything will come out all right in the end; everything we know about the reality of this situation tells us that most likely, it won't.

But as the film settles into its narrative, that suspense begins to suffer under the law of diminishing returns. Barmak's untrained lead, Marina Golbahari, has a wonderfully expressive face but is never convincing as a boy. As indignities and close calls accumulate, the film, for all its beauty, starts to run in circles in its desire to convey its message. And this didacticism undermines the film as narrative.

As historical document, however, Osama is a thing of beauty and a powerful, lyrical reminder of a tragic period, one still fresh in the minds of those who lived it and portray it on screen. This, I imagine, is why Barmak made the film in the first place, and he is to be commended for creating a moving piece of propaganda for all the right reasons.