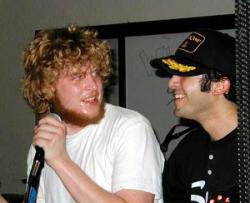 "We're dorks, but we're cute dorks!" announced Ambitious Career Woman. And you know, their self-effacing charm must have done the trick, because they won the judge's award for Cutest Band in Seattle!

These guys played LOUD. They were over-driving the hell outta the speakers, and their first song was called, "Thanks for Ruining My Birthday." Was this *cute*? It made me want to beat people up. It made me want to put the CD in my car and drive really fast.

Our-honorary-imaginary-all-ages correspondent Alisha had some wise feedback: "This goofy but lovable trio made up in quirkiness what they lacked in cuteness. Their set was energetic, loud, and well, jumbled. I got the overwhelming sense that these guys needed girlfriends to fix them up," Alisha said.

I gotta concur. In the fashion sense, the boys needed some help — though their look was cute, in a crunchy kinda way.

I thought they were sweet and cute. Each band participating in the contest had a distinct look… ACWs was that of your lab partner with the coy smile. But for Alisha and igDana's sake, good thing they tore their shirts off on command then… (well, they removed their first layer. Each guy had another shirt underneath. So… it was more cute than sexy. Which was good, right?)

I'll admit, I enjoyed their endearing antics the most. My favorite part was when out of nowhere, an eight year old named Riley was thrust onstage. The storyline was that he was looking for his puppy. My money is on the fact that he is is actually the drummer's brother, who was bribed with Hot Wheels to get onstage to up their cute quotient. Which he did.

Plus they were humble, proclaiming once Riley left the stage, "He was cute, but Asahi's gonna rock." I think they were legitimately surprised by their award. And that's cute, even if their next song sounded like Suicidal Tendencies. I'd definitely love to hear them in a different context, one with a stronger sound system {and perhaps one that served stiff rock 'n roll cocktails as well…}

"The thing that stuck out to me was they were obviously having a great time and I think that was inevitably contagious," said Alisha.

Ok, at first they scared me. They were loud — I kept checking to make sure my earplugs were in. But by the middle of their set, their disarming banter and enthusiasm for their music won me over.