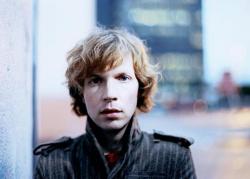 The Flaming Lips and Beck

What does forty bucks get you on a Saturday night? In a recession, more than you might think; three disco balls, the best acoustics in the world, and a crash of zoo animals waving flashlights around a darkened, foggy auditorium. Forty bucks gets you Beck and The Flaming Lips (hereon to be known as "The B/Lips") at Benaroya Hall on a Saturday night making like a bar mitzvah band on holiday.

The zoo animals waving flashlights were actually volunteers dressed up in rabbit, tiger, and lion suits and they crowded the edges of the stage for the length of the opening set. Very festive, like a cross between Maurice Sendak and Randy Wood. Too bad The Flaming Lips' lead singer wasn't singing better or else we might not have needed to be so distracted by the menagerie; Wayne Coyne sounded like he had strepped throat and had just gargled lye and his singing was more like a muffler backfiring than the melodic voice heard on the albums. Fortunately this didn't matter too much. Like I said, the zoo was out and they made all things cheerful.

An hour later, Mr Beck Hansen appeared alone on stage in front of a gauzy black curtain and performed 3 songs o solo mio. His voice did not sound sick or damaged, quite the opposite in fact. Anyone that thinks his voice sounds gorgeous on "Sea Change" has only heard it at half-volume. The Beck could sing a lullaby to Ariel Sharon that would turn the man into tree-hugging, bong-blowing, barefoot-skipping child of everlasting soul love. Later on in the show he sang "Nobody's Fault but my Own" kneeling down playing a harmonium with a turqouise light shining down that put tremblors through my heart and stardust in my head.

The B/Lips were an interesting combination together, sort of vaudeville-esque. Beck and Coyne blazed a good chemistry, though Kramer upstaged his younger (headlining) friend a bit too much for my tastes. They engaged in hilarious badinage. But at the end Beck was first to leave while Kramer stuck around waving lights and soaking up the applause. One is quiet, sardonic, while the other is frenetic and psychedelic, like Jim Morrison and Captain Trips sharing a bill: Good idea on paper, a bit muddled in execution. They did sing a duet of "Who Loves the Sun" that was faithful and fresh, and the harmonies were decent, so it weren't all tar and feathers.

As the enormous screen looming in backdrop glowed and glimmered with streaks of aquamarine, violet, orange and pink staining and fusing into each other, The B/Lips played heavily from "Midnight Vultures," which seemed to please the sold-out crowd all to pieces. A few selections from the new album sprinkled with "Odelay" and "Mutations" tracks (set list can be seen below) all came off well, with the band offering enlivened interpretations and Beck pointing, screaming, and robot dancing with muted enthusiasm. He gave the impression of deep mordant thought, as if his mind were bent of healing a shattered heart. Not once did Beck smile. Maybe he's that low-key or maybe he's bottled-up. Certainly he's anything but silly or a tricked-out cheese-slicer. The eking voltage of his performance did seem out of step with his wild funky numbers, even so, and I wished he would get back to that 12-string alone and share some more of his beautiful ballads.

This has been Imaginary Boy Martian Capella reporting memorex from Seattle.

Guess I'm Doing Fine
Side of the Road
Do You Realize???
The Golden Age
Get Real Paid
Loser
Cold Brains
Lonesome Tears
It's All in Your Mind
End of the Day
Pressure Zone
Who Loves The Sun
Nobody's Fault but my Own
Lost Cause
Readymade
Nicotine and Gravy
Devil's Haircut
Where It's At