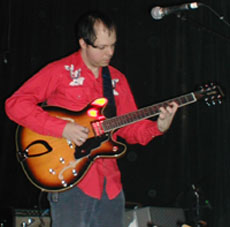 For the most part, the re-introduction of a historical phase is the cause of nothing other than grief — to repeat what has already been done seems boring and cheap. In the case of the recent Shoegazer resurgence, I am easily able to over-ride (no pun intended) any such negative thoughts and fully embrace it. Break out the Ride Boxset and My Bloody Valentine vinyl, the Shoegazer term is once again being thrown around with enthusiasm and vigor! And, in true Seattle-style, we are ahead of the curve and already have one Shoegazer tribute night under our collective belt.

But, before we progress, let me be the first to admit that I think I missed Shoegazer on its first go around. Let's define.

Right… that is the great thing about a resurgence, there are definitions everywhere. In the search for the most eloquent and tangible description — I found two that warm my cockles most:

All Music Guide: Shoegazing is a genre of late '80s and early '90s British indie rock, named after the bands' motionless performing style, where they stood on stage and stared at the floor while they played. But shoegazing wasn't about visuals — it was about pure sound. The sound of the music was overwhelmingly loud, with long, droning riffs, waves of distortion, and cascades of feedback. Vocals and melodies disappeared into the walls of guitars, creating a wash of sound where no instrument was distinguishable from the other. None of the shoegazers were dynamic performers or interesting interviews, which prevented them from breaking through into the crucial U.S. market. In 1992 — after the groups had dominated the British music press and indie charts for about three years — the shoegazing groups were swept aside by the twin tides of American grunge and Suede, the band to initiate the wave of Britpop that ruled British music during the mid-'90s.

Until tonight's "Feed Me With Your Kiss" event to promote the new Reverb Records compilation of Shoegazer covers by the most qualified of NorthWest bands. Seattle Shoegazers united and put together an evening of a bunch of bands paying tribute with all phasers/flangers/tremolos/reverbtos in full effect at the The Crocodile Café. The bill included Voyager One, The Silver Surfer, Saturna, The High Violets, Hypatia Lake, Nordic, and Black Nite Crash. Each band offered up 2-4 true-to-the-original songs from their Shoegazer mix tapes.

We got there a bit late so we missed the first few bands, but caught the last four bands. {That is the great thing about a sampler night such as this — one can arrive late and still see four bands before 1 a.m.}

Voyager One, who I bet have been waiting their entire lives for a chance to do a concentration of Shoegazer covers, did Ride's "It's Alright" and Jesus and Mary Chain's "Reverence." Hypatia Lake again amazed the Imaginary Girls with their pedal prowess on cover versions of Flaming Lips' "Mountain Side" and Mercury Rev's 'Frittering.' Smiles from all when they introduced their Flaming Lips' cover with "We don't know if it qualitifies as Shoegazer to some, but they certainly used a lot of pedals."

Next we were introduced to Saturna. They did (I am fairly certain) a couple Ride songs and Catherine Wheel's "Crank." Hmmm… so far no song repeats…

I wonder if there was a band conference call and they all listed off what each other was going to play so that all of the Shoegazer classics were covered and there weren't any duplications?

I heard that the bands worked on a 20% rumor, 80% guesswork on who was playing what calculation when they decided what to practice.

How Shoegazer of them; don't look up from the pedals much to strategize… trust in thy reverb and it will all work out. I assume then that they assumed that somebody else was covering the Slowdive and My Bloody Valentine portion as those were the most obvious covers for the evening?

Next up was Black Nite Crash, who were our final Shoegazer-troop of the evening. How poetic that the lead singer was spotted wearing a My Bloody Valentine t-shirt under his buttoned up epidermal shirt.

Once again, I found myself in front of a band I had never heard of… and by the third note of their second song, they shot up to my "I've got to see this band play their own stuff sometime soon" list. What could be such a weak-in-the-knees second song? They covered Adorable's "Homeboy" (insert 45 exclamation marks here). One of my favorite songs in the world and the first cover song I learned to play on the bass (shh… besides being one of the most amazing basslines ever, it is also fairly simple)… and they did it justice! For four minutes and twenty-seven seconds I traveled back in time and nearly filled the void in my heart where the "I've got to see Adorable perform "Homeboy" at least once in my life" is. From there they played a couple more songs (one that they even introduced as "not a cover song even though it sounds like one") — but to tell you the truth, I was so light-headed from the "Homeboy" cover that I couldn't capture much detail from there on out. I just went and found igDana. She was able to slightly get me centered enough to get home without incident.