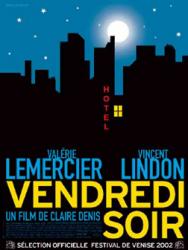 If you've seen Beau Travail, and especially if you like boys, you're probably well aware that director Claire Denis is a fantastic sensualist. Her masterpiece is a hot and existential movie loaded with toned, sun-drenched lads at a French Foreign Legion outpost in Africa; there's nary an unsexy frame to be found.

In her wonderful new film Vendredi Soir (aka Friday Night), Denis uses a traffic jam on a cold Paris night to get her heroine Laure (famous French comedienne Valérie Lemercier) some booty. Laure, you see, is in the midst of moving in with her boyfriend. It's Relocation Day Eve, in fact — she's packed up her possessions and is heading to friends' for dinner (she seems unsettled and obviously needs a change of scenery) when she gets stuck in the jam. A female radio voice (on a station that seems to be devoted exclusively to the traffic problem) gives frequent, fatalistic updates on the situation and actually urges people to pick up hitchhikers and wanderers.

Yes, that's probably in Laure's head. A good part of what we hear and see on this Friday Night is. There are more than a few visually delightful little fantasy sequences that are, for lack of a better comparison, Ally McBealish in nature. (Like Morvern Callar, this is a film whose real setting is a character's interior world.)

So whether that aforementioned booty actually happens for Laure is really your call. The booty (real? Imagined? Who cares? I just like typing "booty") comes in the form of Jean (scruffy-hot Vincent Lindon), a confident drifter who gets in Laure's car, undoes a few of his collar and sleeve buttons (very sensually, might I add) for the sake of comfort, and promptly falls asleep.

Laure dozes too — so is everything that takes place thereafter a dream? It kinda seems so a bit later when Jean takes the wheel and drives backward through an alleyway to steer the duo outta the clog. It's enchantingly surreal watching Laure's face as this hidden part of the city flashes by impressionistically in the passenger-side window reflection; she's like Alice falling through a Euro-urban rabbit-hole.

(And I've just thought of a better comparison for those fantasy sequences: they look and feel an awful lot like the bizarre imagery of Czech animator Jan Svankmajer's dark take on Alice in Wonderland, Neco z Alenky.)

Eventually there's an extremely realistic sexual encounter in a seedy hotel — no delicate lighting or overly-choreographed body movement to be found. Arms get in the way, clothes are difficult to remove, hands wind up smelling of rubber. It's exquisitely anti-glam.

As are the wonderful stars. Their bodies are lived-in and imperfect, their performances sly and vulnerable and tender. And when their time together is over, Laure has a final vision: her belongings back home magically leave their boxes. She departs from the still-sleeping Jean and goes outside to face the sunlit day; her life has been changed by this fateful Friday night.

Even if she really didn't get booty.