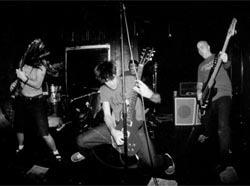 Dirt Bike Annie, with Tales From The Birdbath

Clinic, the Re-bar's weekly music series sponsored by Tablet, is a great way to check out up-and-coming bands on Tuesday nights (and, ostensibly, a great way to dress up as a porn-style "naughty nurse" like the hostess of the series, but that's another story).

The Re-bar's low stage and smaller size make the venue an ideal location for a series that promotes bands that don't necessarily get the big press in Seattle, and Clinic really shows promise: I took a look at the upcoming shows schedule, and the caliber of the bands I had heard of (I noticed to my chagrin that I had just missed Slo-Mo Rabbit Kick the week before…) made me trust that I'd see a good show on any night of the series. I hope that Clinic continues!

When I arrived, the stage was already set up with the show's headliner Dirt Bike Annie's gear: two guitar amps, bass rig, full drum kit. When opener Tales From the Birdbath climbed on stage, they carried with them a small guitar amp, an electric guitar and one floor tom. They set up and started playing in front of Dirt Bike Annie's already set-up gear.

Tales From the Birdbath is the husband and wife duo of drummer Reba Hernandez (who also drums for the Cripples) and singer/guitarist Ean Hernandez of Sicko. For the most part, the Birdbath's stripped-down, endearing lo-fi pop is different from both Sicko's frantic pogo-punk and from the Cripples' maniacal synth-garage, but the emphasis on humor and the sheer catchiness of the songs connects the Birdbath to Ean & Reba's primary bands.

A two-piece before two-pieces were cool, Tales From the Birdbath makes the most out of their limited instrumentation. Reba produced different sounds out of her drum set-up by hitting the tom's rim, its sides, and a nearby stool that her maracas rested on. Ean's clean guitar carried the songs with a cross in styles between heavy metal power chords (albeit undistorted) and R.E.M.-inspired arpeggios. Their between-song interplay was funny and involved long, almost apologetic explanations of the origins of the songs. And, they wore white lab coats!

Concise and catchy, the Birdbath's songs are singalong cute on the surface, and at times that's as far as it goes: "Snowcone" is a perfectly-written indie pop tune about eating snowcones on a first date at the Woodland Park Zoo. "Barbara Tuchman Overdrive," about the award-winning historian, revels in the author's wide-ranging knowledge of European history ("from Geoffrey Chaucer's day job / to the Order of the Star!").

Some songs, however, reveal a twisted secret heart underneath. "Sex Offender Santa Claus" offers a look inside the mind of a child molester who gets a job playing Santa at the mall. New song "Stage 1 / Stage 2 / Stage 3" describes the onset of syphilis. Talk about infectious. Only Tales From The Birdbath can write a catchy pop song about syphilis!

They closed their set with "Chichen Itza," another song inspired by the Discovery Channel. The song describes a headstrong young archaeologist who defies an ancient curse in order to continue digging at a Mayan site. The innocence of the chorus, "they made their homes beside the blue sea" contrasts with the creepy detail of the verses: "this could be the last sip of my water bottle." Reba pounded her tom, Ean chopped at his guitar strings, and in the end our hero meets an untimely demise. Or does he? Luckily, Ean and Reba announced that Tales From the Birdbath would be playing more frequent shows in the next few months, so I'll have another chance to figure it out.

Before this show, the only information I had about New York City four-piece Dirt Bike Annie came from imaginary friend (and karaoke superstar) Andy S., who had given me a concise two-part preview. Dirt Bike Annie, Imaginary Andy informed me, a) knew how to rock, and b) knew how to party (they had crashed at his house during their last Seattle show, and there was lots of beer involved). That was enough for me.

Dirt Bike Annie took the stage with props galore: life-size stage posters, a smoke machine, a bubble machine, and strobe lights. Quite a visual spectacle – despite the way they dressed, this was no ordinary by-the-numbers t-shirt and wallet-chain pop-punk band.

With the strobe on full effect, they kicked off their set with album-opener "Battle Lines," and by the time they hit the chorus, the first half of imaginary Andy's preview had already proven true. The band knew how to rock. Guitarists Adam Rabuck and Jeanie Lee wielded their instruments into a twin sonic assault that was both massive and melodic. Beret-sporting bassist Daniel Paquin and spazz drummer Michael Yannich gleefully pounded out a chunky rhythm. "Battle Lines" had that most elusive of pop song qualities—a solid hook—that made the torrent of bubbles and smoke seem almost unnecessary.

But the effects weren't there to cover up any shortcomings in the band – the elaborate stage show kicked an already solid live act into a higher gear. I am a sucker for a band that plays two songs in a row without a break; back-to-back songs give any show a "living jukebox" feel that I am always impressed by. Dirt Bike Annie raised that bar for me by playing FIVE songs without interruption, only a breathless 'hello' and 'thanks' in between. As the band later explained (when they finally did take a breather), those first five songs were all from their newest release Show Us Your Demons, released on Seattle's Dirtnap Records.

Dirt Bike Annie had fun on stage, and they weren't afraid to tweak their songs for live performance. After only a few songs, they kept the rhythm going after a guitar solo, and Adam announced, "this is the first of many break-it-downs of the evening." He wasn't kidding. False endings, Journey-esque hand claps over the head, a cappella harmony breaks—the band had a full arsenal of tricks that, again, made their performance add up to more than the usual "here are some songs off our newest record" rock show.

Throughout the set, lead vocals traded off between Adam and Jeanie. While both vocalists were strong, I wound up liking Jeanie's songs a little more—my favorite was "Two Ton Wait," a peppy, tongue-in-cheek song that sounds like the New Pornographers by way of the Replacements. Jeanie's lyrics are a self-effacing plea to cut through bulls*%t and to, "make light of the things that sorta matter."

At the end of the night, imaginary Andy told me that he had talked to all four members of Dirt Bike Annie, and that none of them remembered crashing at his house. So both parts of his preview turned out to be true: not only did Dirt Bike Annie know how to rock, but their beer-soaked post-show amnesia attests to the fact that, yes, they also know how to party.