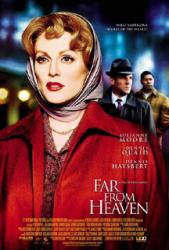 It was an excellent year at the movies. Festivals galore (SIFF, SUFF, Women in Cinema, the Seattle Lesbian and Gay Film Fest); ever-groovy calendar programs at the Little Theatre and Grand Illusion; Warren Report, Sneak, and Cinema Seattle screenings…

But when I look back at 2002, I mostly think of Julianne Moore. Near the end of Far From Heaven (a superbly-crafted homage to 50s filmmaker Douglas Sirk, and my favorite film of the year), Moore's privileged 50s Connecticut housewife breathlessly utters three words to Dennis Haysbert: "You're so beautiful." Then there's not a dry eye in the house. Well, if the house is me, anyway. The power of that one wrenching, thrilling moment never lessened over the three times I beheld it.

Todd Haynes' masterwork is so much more than a histrionic weepie, though — it's like the 1957 film that Sirk never could have made. Subtexts only hinted at in many of his noted melodramatic "women's pictures" — sexual ambiguity, interracial romance — jarringly rise to the surface in Far From Heaven. And the great character actress Celia Weston is deliriously ruthless as a rich-bitch society maven. And Dennis Quaid is at his hunkiest (hello, treasure trail!). And there's this stunningly-scripted mini-treatise on Miró and the divinity of modern art…

So that tops the list of my three favorite 2002 films, for which you'll find clever little blurbs below. Three runners-up and three honorable mentions follow. Then, in an attempt to further assimilate with true Three Imaginary Girls form, I've chosen my three favorite music-related films of the year as well.

Enjoy. And get your ass to the theater.

FAR FROM HEAVEN. Julianne fascination. Gorgeous autumnal colors. Thoughtful evocation of a bygone era. I love me some Far From Heaven.

SPIRITED AWAY. A Zen Alice in Wonderland, with unaccountably soul-stirring scenes that evoke the scary magic of fairytales and myths. Every frame blooms with color and detail. I'm still partial to his 1989 charmer Kiki's Delivery Service, but Spirited Away is a Miyazaki masterpiece.

TALK TO HER. Almodóvar's latest cinematic concoction is a beautiful, devastating, unpredictable love yarn sprinkled with a giddily perverse b/w silent film and lovely Pina Bausch dance sequences bookending the story. Mix in a chance meeting, add a dash of catharsis, fold in a generous measure of that signature visual fabulousness, and enjoy the feast.

ADAPTATION. A mind-boggling film about the experience of watching it. Do I even need to elaborate? What are you doing reading ::tig:: if you haven't seen this? Go. Now. Just don't steal any orchids along the way.

RABBIT-PROOF FENCE. Based on actual events, this hauntingly triumphant Outback survival tale is a girl-power movie of the highest order. It's also an effective coming-of-age drama, with a breathtaking revelation that shook me to the core.

WHAT TIME IS IT THERE? Isolated, emotionally-disconnected characters seek wholeness in this meditative, poetic, delicately absurd (and, sadly, little-seen) Taiwanese film by Tsai Ming-liang.

CHICAGO. Experiencing this post-Moulin Rouge musical was the most pure fun I had at a movie all year. Surprisingly good razzle-dazzle from the oddly-cast players.

DAUGHTER FROM DANANG. Spellbinding glimpse into the lives of a Southern belle and her Vietnamese birth mother. They tearfully reunite, Jenny Jones style, after 22 years. And then… well, trust me – you'll be riveted. It'll be part of the Varsity's calendar program January 24-30, and on PBS' American Experience later in the year.

THE PIANO TEACHER. Deliciously, melodically brutal. Isabelle Huppert's damaged ice queen is one of the most fascinatingly fucked-up characters to stalk the screen in years. (I'm not even scratching the surface when I tell you she sniffs used porn-booth tissues and puts broken glass in an unsuspecting girl's coat pocket, ok?)

GIGANTIC: A TALE OF TWO JOHNS. Entertaining They Might Be Giants profile (which, FYI, includes dramatic lyric readings by the likes of Janeane Garofalo and Andy Richter) that's as delightfully offbeat as its subjects.

I AM TRYING TO BREAK YOUR HEART. In documenting the recording of Wilco's Yankee Hotel Foxtrot, first-time filmmaker Sam Jones balances between reportage and fanboy-worship to create an intriguing black-and-white pastiche of a beautifully vibrant band.

STANDING IN THE SHADOWS OF MOTOWN. A group of musicians called the Funk Brothers created the "Motown sound" for such R&B lengends as Diana Ross, The Temptations, and Stevie Wonder; this fantastic doc finally gives them some much-deserved (and long-delayed) props. The surviving reunited Brothers are joined onstage by contemporary artists like Joan Osborne and Me'shell Ndegeocello — and the results are electrifying.