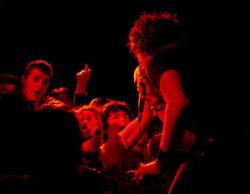 That's what I was thinking as I was standing out on the sidewalk in front of the Vera Project at the end of a very long line. Once again, I'd forgotten about the fact that most good all ages shows in Seattle sell out before the day of show, and Hot Hot Heat was no exception. The sign on the door said that all of the advance tickets were gone, but there would be 100 more tickets available when the doors opened. A quick informal tally and I was on the phone with my friend Mark, telling him not to bother coming down as it looked like there were between 99 and 101 people in front of me, but I decided to take my chances and wait it out.

As my good friend James and I got to a point about halfway up the stairs, we heard the person at the counter shout there were only 20 tickets left. There looked to be about 50 people in front of us, so we thought we were pretty much doomed. I somehow convinced James to hang on, because on the off chance that we did actually get in, it would be well worth it.

After we purchased our tickets, there were exactly four left. Whew! We made it in! Starving, we left the club shortly after arriving and verifying that our "magic stamps" (as the door guy put it) would get us back in. Upon our return, igDana informed us that the opening band, the Thermals rocked (strike that — they RAWKED!), and that we were stupid idiots for missing it and we would probably die lonely and sad as a result.

Oh well. You win some, you lose some.

After a short wait, the Walkmen took the stage. I keep hearing from a certain neighbor of mine about how great they are, but I just can't get into them. Don't get me wrong, I think they're really good, and their singer looks to be putting his entire existence into every note of every song. But, the songs start to sound alike and get a little tedious after a while. I made it through their set and clapped for every song, but I never really got going.

Finally, Hot Hot Heat took the stage and I was ready to go, as was the rest of the crowd. HHH is still a very new band to me. I first heard of them a few weeks ago (I gave up on the radio a long time ago) at the aforementioned neighbor's place and they really stood out. Conveniently, they played Graceland a couple days later and I was rocked — by Canadians!

In the simplest terms, Hot Hot Heat plays amazing pop songs. Two songs into the set, I'm nostalgic for great 80's new wave and early 90's alterna-synth-progressi-pop (I just invented that term. Eat THAT, Rolling Stone). I'm hearing the influence of Elvis Costello, the Cure, early Depeche Mode, and maybe even Kajagoogoo (it's the voice, man!), but with a crunchier, stompy-er under-current and catchy well-constructed piano and guitar melodies that remind me that, despite what a lot of the press has said about this band, it HASN'T all been done before. Pay closer attention (or just check out their t-shirt) and you can feel that this band also has a soft spot for good old mod/garage rock. That gets you triple bonus points with me, lads.

"What's this bizarre sensation? Oh. I'm floating. Why is that? Because my feet are off the ground. Bounce, bounce, bounce…"

If you can stay planted through songs like "Get In or Get Out" or "Le Le Low", or if you can stand there and not at least bob your head about uncontrollably to "Talk to Me, Dance With Me" or "No, Not Now", then you probably ought to call 911, because you've most likely died. Or at least been paralyzed.

Lead singer Steve Bays keeps you feeling like you're his pal throughout the set — smiling at you and getting down in your face to shout out your favorite part of your favorite verse of your favorite song. One hand wailing on the keyboard and the other strangling the mic, the man struggles to keep his balance as he soaks up the crowd's adoration with his peculiar shaggy head.

Dante DeCaro, guitarist, backup vocalist, and possible veteran of mid-80's John Hughes films (my research team is looking into this) rocks hard through the set, providing good fuzzy riffs that compliment Bays' keys quite well and build hook after hook that will be stuck in my buzzing head well into tomorrow afternoon. Drummer Paul Hawley and bassist Dustin Hawthorne complete the equation with a solid thumpy wall of rhythm section that makes you feel like you're not just listening to Hot Hot Heat, you're being run over by Hot Hot Heat.

A short set wound down quickly, with the band exiting the stage after winding up with "Bandages", only to return a moment later for a quick two song encore… and then it was over.