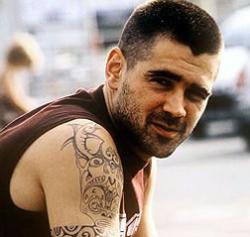 "Clean up that sick before someone slips on it."

A simple description of the wonderfully entertaining new Irish film Intermission may seem familiar: it’s a directorial debut featuring a star-studded UK ensemble of interrelated urban characters seeking love and acceptance as their lives mingle and merge. Think of it as the un-Love Actually.

Intermission’s similarities with its glossier, cheesier cinematic cousin pretty much end there. Its wry, rowdy sense of humor makes itself known in the opening frames as we’re introduced to petty criminal Lehiff (ever-sexy Colin Farrell), whose violent instability comes to light in a jarring, U2-themed adrenaline rush. We soon meet a recently-heartbroken grocery-stockboy named John (azure-eyed Cillian Murphy, who doesn’t flash dingdong like in 28 Days Later) and his ex-girlfriend Dierdre (lovely Kelly MacDonald), who has a blunt and bitter sister named Sally (fantastic rising star Shirley Henderson) with a self-image problem only made worse by her … ahem … moustache.

You got all that? I told you their lives mingle and merge. And the assured script by playwright Mark O’Rowe, coupled with newcomer John Crowley’s vivaciously rough-and-tumble direction, holds it all together beautifully. Surprises abound, preconceptions shatter. And the riveting climax is, somehow, just the crash-and-burn this story needs.