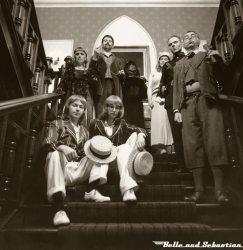 "I think they're ugly." Lindsay, the ex-editor of my college paper, is looking at the people on the cover of Belle and Sebastian's single "Step into my Office, Baby."

I ask her to elaborate, but she just rubs her forehead with a pink-sleeved hand. Sitting across from me in a Barnes and Noble Starbucks, she studying and myself trying to write a review, I ask her again for some help. "No…I hate you Joe." Then she laughs and turns back to her modern art textbook.

Despite Lindsay's hating me, I sip my coffee and try to remember that night in Paris when that same Lindsay now sitting across the table was also there on spring break, but decided to stand me up. As she apparently found something else to do, I went to see the most lovable of indie rock collectives, Belle and Sebastian.

I'm a Belle and Sebastian nut, and due to said nuttiness, I could not wait to see them for the first time. I missed them in their brief US tour last year when they played a sold-out show in DC with Sleater-Kinney (sniff, tear). The clerk at our neighborhood record store, who went, said it was probably the only time you would see members of Fugazi at a Belle and Sebastian show.

But anyways, Paris. Because Lindsay didn't call me I assumed she didn't want to go. Alone on only my third night in Paris, not to mention my first full day of being 21, I was resolved to go to the show by myself. I mean hey, I waited four hours in the cold outside the Moore Theatre to see Sigur Ros; waiting somewhere in Paris shouldn't be a problem. I doubt I'll meet the same entertaining Evergreen State students, but maybe there's a French equivalent to majoring in punk rock.

As luck would have it, I met a girl named Lisa from Berkeley who was also planning on going to the concert alone. Bonding over our love of kicking the crutches out from under crippled friends, we decided to go together. (By the end of the night Lisa was my favorite person in the world; not just because she sold me a ticket to see Air three days later, but because she was the only person I had met in a long time who believes The Bends to be far and away the best Radiohead album, while maintaining at the same time that OK Computer and Kid A are still stellar.)*

The concert was in the city's second quarter, right before halftime… HAHAHA! … errrr….ahem!… When we got to the venue, the line was epic length. French people, apparently, like to get there early. No matter, we just pretended it was a Pearl Jam show on election night.

It was in line that we met Mona, a twenty-something British girl with good teeth (seriously!) who heard us speaking English and asked if she could cut in "the bloody long queue of idiot frenchies." Because she was there by herself, and because of her good oral hygiene, we let her cut.

After some waiting and talking about the best way to get work visas in Europe, we were inside, seated in extremely comfortable leather recliners. The entire theatre had some of the most comfortable seats I have ever sat in, and apparently this is the norm in France. After an opening act, which rivaled only puppy torture as my least favorite thing of the moment, Belle and Sebastian were up.

What an awesome show! Expectedly, most of the songs played were off of their newest record, Dear Catastrophe Waitress, but beyond that they drew primarily from their first two full-lengths, Tigermilk and If You're Feeling Sinister. And the between song banter, all in English and coming mostly from bandleader Stuart Murdoch – although he encouraged his French-speaking bandmates to talk – was just as witty and funny as the music.

At one point, for the performance of the title track to their new album, Stuart brought a table and chair onstage while donning a jacket and 1920's era hat, making him look not entirely unlike Jude Law in "The Talented Mr. Ripley", (before the whole rowboat thing.) Seated at the table, he began to sing, while the catastrophe waitress herself ran on and off stage, doing various catastrophic things such as spilling coffee and tripping over herself. This little bit of dinner theatre eccentricity was not unlike Belle and Sebastian's show as a whole: A little surprising, a little unnerving, a little cuter than you'd expect a band who tours with two semi-trucks in tow to be.

The twelve members on stage, (four of whom comprising a string quartet) serenaded the comfortably seated audience with impressively precise renditions of songs like "Step into my Office, Baby" and "I'm a Cuckoo," especially considering the obvious loose nature of the band members as displayed in the hectic running around and changing of instruments that occurred between songs.

At one point, angry with his bandmates for not speaking to the audience in French when he knows that they are completely capable of doing so, Stuart claimed that given two months, he'd speak better French than anyone in the audience. As if to prove himself, he recited his favorite French phrase: "Quel du neuf, coquette?" (What's new, chick?). After the French lesson and the laughs which followed it, Stuart said it was time to get "grâve" (serious) and launched into the song I was waiting to hear all night, "Tigermilk's" "The State I am In."

It was also a moment of Belle and Sebastian history, or so Stuart told us. For the first time ever, the band played a second encore. The first encore, a beautiful rendition of "Get Me Away from Here, I'm Dying" from their second album, was hard to top, and in all honesty, I thought it better than the history-making performance of "Baby Girl." But it was cool to be there nonetheless.

After the show, Mona, Lisa and I parted ways, and I took the metro back to my bed in Montparnasse – dreaming of horses, foxes in the snow, pocket novels, and Mike Piazza.

*Some of the names were changed for reasons of humor and as shout-outs to dead artists.