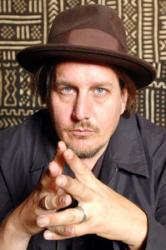 At the last party at I.G. Dana's house, some folks on the porch were talking music and one guy started dissing Courtney Love. "OK, so how do you know she's an evil bitch?" I asked. His response, "Ummm… because Krist Novoselic told me so!" Right. Now I'm not going to argue with that. It may have been true, but it was blatant name dropping — I'll bet he says this stuff to all the girls.

Since living in Seattle, I've come across plenty of folks who are not at all shy about producing a resume of their rock star connections. "I know Eddie Vedder's wife," "I went to high school with Queensryche," and "Lars Ulrich's dad lives in my building," are among my favorites. Keep 'em coming — because I got a line that will one-up all of those. You see, at one point in my life, I was dating Kevn Kinney's babysitter.

Kevn Kinney was the lead singer for Atlanta rock band, Drivin- N-Cryin. In the early 1990's, Drivin-N-Cryin was to Atlanta as Mudhoney was to Seattle. Perhaps they were not well known on the West Coast during their tenure, but the band was selling out show after show throughout the South.

When I was 19 years old, I arranged a date with a girl named Beverly, who was later revealed to me as the babysitter for Kevn Kinney's children. How this happened is not important as the fallout that occured from the moment I told my roommate. As soon as he knew, the entire floor of my college dormitory was aware of it.

Suddenly everyone was asking about my connections to the band. Guys I didn't know were asking me for concert tickets for themselves and their girlfriends. Frat boys wanted to know if I could help them book Drivin-N-Cryin for their next house party. Others just wanted their "Mystery Road" CD autographed. With all this attention, I couldn't help but dream about the new directions my life would surely be taking. I guessed that I would soon be hanging out backstage and partying with a wild assortment of musicians, roadies, groupies, and hooligans.

Another boost to my ego was Beverly calling me from Kevn Kinney's house during the week. It was so cool to be able to hold a hand over the phone and shout to incoming visitors, "Not now, I'm busy talking to someone from the Drivin' N' Cryin house." This was Wednesday, and my first date with Beverly wasn't until Saturday.

I'll save everyone the long story. That first (and last) date with Beverly still ranks as the worst ever. My rock god status was over before it even began.

Fast-forward ten years ahead to present day. Kevn Kinney played the small Northwest Court stage at Bumbershoot on Sunday. He was joined by Lenny Kaye [who wrote and played songs on Patti Smith's "Horses" record — which you should buy if you don't already have it!], and the two played a set of folk songs from Kevn's solo albums. Kevn's songs are not the metal rock of Drivin-N-Cryin, although I'm certain "Straight to Hell" is still regularly played in his set. Kevn played an acoustic six string guitar, which was complemented nicely by Lenny's electric Fender. The songs are honest and personal experiences about driving with the radio turned up (on the road to Birmingham), or a ballad about the mill closing, or some other tune that makes you think about the finer places in Georgia.

As I looked at these two guys on stage, I couldn't help but think about how they were once the rock stars of their day. However, both seemed satisfied to sell fewer records and play to smaller crowds.

So what's the point? Perhaps it's the Warhol 15 minutes thing. We're all rock stars for a short while, but it's what we do that's important after the record fades off the chart. (No, scratch that. That sounds lame and clichéd.) Perhaps my real point is that that Kevn Kinney still remains a talented artist producing music that resists the temptation to sell out. Or perhaps I just want you to shut up about Courtney. Until you get calls from Frances Bean's babysitter, my story trumps your nonsense at any party.