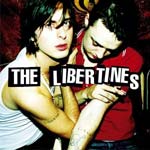 It's a well-known fact that the UK music press cycles through contenders for the "Greatest Band Ever" crown like Winona Ryder goes through indie-rock boyfriends. Grab any issue of New Musical Express and you'll be treated to pages and pages of amped-up stories about the next big things, gushing reviews of single b-sides, and candid photos of these up-and-comer's posing at record release parties with either Damon Albarn or Robbie Williams.

So, new week, next issue. A London four-piece called the Libertines, I was promised, was here to save rock and roll from its doldrums with the band's invigorating dose of raw 70's-influenced punk-pop. Their sound—and, not insignificantly, their look—relies heavily on the achingly-stylish trend of carefully-orchestrated sloppiness: mop-top haircuts that require "two hours to get right" (according to Libertines singer Peter Doherty) and catchy, scruffy two-minute songs that continue to connect the Britpop dots from the Stranglers to Supergrass. So with "Greatest Band" hype behind them, the band was ready to share its message to a hungry public. The Libertines definitely had something to say, and it was this: "fuck."

Yah. Their first single "What A Waster" was banned on BBC radio for its profanity, but that didn't stop the single from hitting the British charts anyway, a significant achievement for a debut single with little radio support. The BBC was incensed, the Libertines' popularity soared (Mick Jones of the Clash signed on to produce their full-length), and NME had print for its pulp for at least two more months.

Of course, none of this drama meant a pip in the colonies, where 'average' American music fans hooked on Linkin Park and AFI barely know who Damon Albarn or Robbie Williams are, let alone the upstarts photographed next to them. So, like many UK bands before them, the Libertines kicked off their first American tour with a mixture of anticipation and the begrudged acceptance of playing smaller US venues, downsized from Britain's arenas that the band's already getting used to.

Which brings me to the Crocodile Café on a Monday night. The Libertines took the stage in a shaggy mess of cigarette smoke, leather, denim, and hair. It made me wonder what the band looked like before the Strokes toured the UK. The Libertines got going a little sluggishly but I think it was part of the act—the shoddy start designed to make the middle portion of the set stand out. Any band that looks this much like the Strokes is likely to try to put us on by pretending they're not putting us on.

Because, sure enough, the band hit a great stride four songs in. "Vertigo" and "Death on the Stairs," both from the band's stateside debut Up The Bracket, jittered with the rush of a late-night second wind. Lead vocals swapped between guitarists Peter Doherty and Carl Barat, and as they bounced around, switched mics by jumping to opposite ends of the small Croc stage, and smoked, it was obvious that the two singers were good foils for each other. Pete was snarlier and attacked his guitar strings with vitriol. Carl tended to ground Pete's trebly guitar assaults with thick rhythm playing.

Drummer Gary Powell was a behemoth on the kit—he kept perfect time even as he flailed away like mad. In fact, his drums were so powerful and precise that they almost didn't fit the band's slovenly garage image. This drummer could easily have playing for Billy Corgan based on the monster rock power he was throwing out. Bassist John Hassell had every possible bass lick down perfectly and reminded me of Smiths bassist Andy Rourke. He had to jump away from Pete and Carl's crashing stage antics a few times, all without missing a note.

The Libertines want to evoke their 70's punk heroes the Jam, the Adverts, and the Clash, and by and large they were successful. They spat out the cheeky "Boys in the Band" and the requisite pinch at chasing US success in "Radio America" with the right mix of sneers and smiles. The Libertines may be carefully orchestrated, but they didn't try to hide their self-awareness (after all, I only know how much time Pete spends on his hair because he told an interviewer so)—and my initial suspicions ultimately faded. Of course, their visible humility could also be the pride-swallowing result of their relatively unknown status here in the US, but it was refreshing to see the Libertines act like they don't care just enough to let us know that they really, really do care. As they say themselves in "The Boy Looked At Johny," "don't you know who I think I am?"

I personally couldn't answer his question. I was too busy reading the newest issue of New Musical Express. Did you know that there are some new bands over in Britain that are going to save rock and roll?