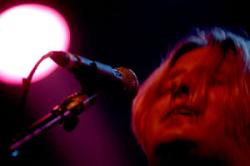 Black Nite Crash: Inside of me

I've been talking about Black Nite Crash since I saw them close out the Northwest Shoegazers Nite at the Crocodile last December. If you recall, that was when I caught their note-for-note cover of Adorable's "Homeboy" that left me weak in the knees.

As a fan of a good cover (note for note or not), I've been waiting to see what I missed at the Shoegazers Nite. My interest was doubly piqued when I heard the mp3s available on their web site.

With the translaton from mp3 to Tractor Tavern live performance, their music sounded notably richer and more affecting. The opening song started slow, dark and contemplative, with a repetitive guitar loop for a long, long time. But when the music came, it indeed crashed — worthy of the anticipation, stoically shoegazer, as unsmiling as expected.

I agree. It had been a way-too-long five months since I had last seen them. During the course of the show, I became even more impressed with their distinctive next step in Shoegazerdom. Their evolved version of perfected territory left me bemused and excited. I felt like seeing Black Nite Crash (a local band from my hometown) play in a dimly lit, sparsely-populated tavern filled in a musical chapter of history for me. I am now able to get over the disappointment I've long associated with the Shoegazer movement – disappointment stemming from the fact that I was trapped in Delaware from 1985 to 1994, torturously far away from anything resembling a wah-wah peddle.

They've taken what they've learned from the masters and built songs that hypnotize with their enveloping guitar swirls, resonating vocals, and impenetrable rhythmic tidal waves. The result is songs that fill an empty room and stun.

The vocal duties primarily belong to Jim, but on one of my favorite songs of the evening keyboardist Jen took over. She sang like a secret weapon, with a flat, cool, slightly-shy insouciance that seemed to say, "Oh God, you don't have to stare at me" — and yet, she was so strangely assured too.

She didn't fall into the lame-o posturings so often be seen in these darkly-dark sorts of bands — she was totally real, no false-gothy or pseudo-sassy girl-pain-rock here.

Jen's part blew me away as well. She offered a surprise, alternate sound the band was able to take. It refreshed the palate and but didn't feel like a veer off to the left in the set.

I've decided that there is no need for Black Rebel Motorcycle Club to release a second album. I just need Black Nite Crash to put their stuff on cd with accompanying cover art and I'll be happy.

Also of note, local trio In the Drink opened the set with their sparsely hollow — nearly hallowed — chilling echos of songs featuring a woody guitar, deep male vocals with these "ahhhh" full female harmonies, and one sad violin. They sounded like the soundtrack for some seedy hip New Orleans flick. I bet these guys loved "Interview with a Vampire" back in the day. I bet they still love it now. They sounded like a gasp, at times abrupt and raw — incongrous and inconsistent and wrong — but I liked it. They're too odd to be for all, and nothing I'd listen to while showering to prepare for my day, but I respected how they were doing something unusual.