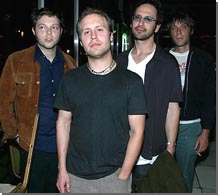 Until recently, I had always been a big fan of music. However, thanks to my inability to say no to a woman, I am now instead a Music Critic.

Thursday, the 22nd of August, Loveless Records' recording artists Los Halos played their First Show Ever. To reciprocate, I made my first ever trip Out to Review a Rock Show. I was a little nervous, so I arrived early to make sure that I didn't miss any pre-show goings-on that the casual fan might need to know about (for the record, nothing happened).

I was waiting for my imaginary girl friend Dana, and was feeling a bit apprehensive about trying to do this job without her. What if I forget to be critical? What if I devolve into some slobbering fan and forget how to speak? (Being imaginary is a lot harder than it looks)

Fortunately the show started with an acoustic solo performance by frontman Samezvous, which I was prepared to watch alone because I anticipated that he would be playing the poppier, simpler For Ramona songs — which I like, but not the way that I LIKE like the first album. So as he took the stage, I settled in to my seat to wait it out.

I'd like to tell you what he played or how it sounded or any of those other details, but less than four minutes into his set I found myself devolving into a slobbering fan and forgetting how to speak. Those songs that in my living room sound like tender love ballads had become roaring testaments to desperation. Hallelujah! The spirit is still alive!

When Samezvous sat up there on the stage, Los Halos suddenly just made sense. His guitar looked like it must be the one he learned to play on so many years ago, and I'm not sure he's ever even changed the strings. But he loves to play it, and it loves to be played by him. Suddenly the world melted away, and all that was left was Samezvous and his guitar, wailing away like it was the end of the world and there was no one to hear him scream — so he could be as loud as he wanted. And he was loud. Dana told you all about the fiery intensity of the full band performance, but I am here to tell you that it paled in comparison to the sheer [insert superlative of passion here] of the solo performance, which raged on through the missed chords and the shattering vocals and even more shattering silences and the strumming and the Strumming and the STRUMMING and what I learned on Thursday night is that

I hate Los Halos. I hate Los Halos in so many ways, because they are so much better than me. They've written all the songs that I have deep inside just waiting for my talent to catch up to me. They've said all of the beautiful things that I was just about to think of. And they do it all with such sincerity, which I will never have. I spit on you, Los Halos, and if you ever talk to my girlfriend I will kick your ass!

Then I woke up on Friday morning and realized that I couldn't go a full day without seeing Samezvous perform again. So I went to his show at Victrola. (For a full review of his performance on Friday night, please re-read review above.)