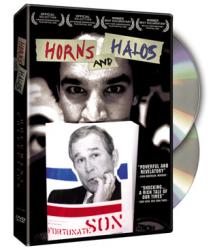 I am not a film fanatic. Sure, I enjoy the occasional foreign film, documentary, or Owen Wilson movie, but I am far from being able to talk intelligently about a Kurosawa resurgence or the latest Brad Pitt movie. So, if I proclaim that a film has inspired me to want to see it again, you know that the piece is more than just a good way to spend two hours.

On 8.22.02 I was able to catch one such film: Horns and Halos — a documentary by Mike Galinsky and his partner Suki Hawley. It won "Best Documentary" at the 2002 N.Y. Undergound Film Festival and has received favorable reviews from all over. Tonight's showing was a special benefit screening of a high quality digital print; money raised went to the creation of a 35mm print, which they need for the Totonto Film Fest.

The story line is a bit twisty and turvy, so as to not ruin any surprises, I will copy and paste from the press release:

"Horns and Halos captures the unlikely connection of three men — a U.S. president, a discredited author and an underground publisher — whose paths to power and popularity become tangled in a book."

In October 1999, a short article appeared in the New York Times: St. Martin's Press recalled Fortunate Son, the first published biography of George W. Bush. At the time of its recall, the book was #8 on Amazon.com’s best-seller list — no doubt due to the book's widely publicized allegations that Bush had been arrested for cocaine possession in 1972. However, Bush wasn’t the only one with a hidden past. Citing distrust of the author, J. H. Hatfield, the publisher pulled the book from stores after learning that he was a convicted felon.

Several weeks later, small underground imprint Soft Skull Press, the self-styled "punk of publishing," announced that it would re-publish the book. But getting Fortunate Son back on the shelves wouldn't prove so easy. Operating out of a tenement basement on New York City's Lower East Side, 29-year-old founder Sander Hicks struggled without significant success for over a year to get the book back into stores and into the national consciousness. After months of lawsuits, bad press, and disagreements with the distributor, Soft Skull made one final desperate attempt to make a splash at the 2001 Book Expo of America. Against the author's wishes, Hicks revealed the sources for the book's cocaine allegations, which leads to electrifying consequences.

With such a storyline, it would be easy to turn subjective and slant the piece with the passion behind such a frustrating topic (I don't have to be objective, do I?). The filmmakers took the high road of letting the characters speak for themselves and the tale tell itself.

I think the filmmaker said it best: As screenwriter and scholar Robert McKee states, "True character is revealed in the choices human beings make under pressure." When faced with difficult decisions there is rarely one clear answer. Horns and Halos reveals the complexities of the decisions rather than simply the results.

You need to figure out a way to see this film and see it. If you can, make a TAX-DEDUCTIBLE donation to help get it to 35mm. We've only got two more years left! (I state that as I clutch tightly onto my passport.)