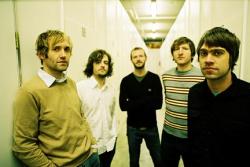 There are times when an album's song titles alone are enough to propel a band onto your musical radar. Minus the Bear's Highly Refined Pirates — their feature-length debut after two well-received EP's — is an exemplary example of this occasional occurrence. Song titles like: "Thanks for the Killer Game of Crisco Twister," "Absinthe Party at the Fly Honey Warehouse," "I Lost all my Money at the Cock-Fights" and "Monkey!!!Knife!!!Fight!!!" are nothing if not intriguing.

It becomes clear after a quick listen that this is no mall-friendly punk ala Blink 182 as the song titles may suggest, but infectious, emotive indie-rock featuring aching lyrics and complex guitar work. Not surprising, considering this is a band that features former members of Botch, Kill Sadie and Sharks Keep Moving.

This was the first night after the Rhode Island Great White tragedy/fiasco. Thank goodness Minus the Bear kept the fireworks to their performance. The passion, intensity and obvious love for what they're playing is a potentially combustible mix, an appreciated delivery after the rather stoic performance of Interpol a week prior. With all the thrashing about that lead guitarist Dave Knudson does, it's a wonder he doesn't suffer from chronic whiplash. Singer Jake Snider has a deep, rich voice that seems to contradict his demure frame. The rhythm section of bassist Cory Murphy and drummer Erin Tate are tight, tight, tight. Matt Bayle's electronics compliment the whole affair with interspersed glitches, clicks and drum loops.

Many of the finest tracks from Highly Refined Pirates were played this evening including searing renditions of most the aforementioned tracks, plus "Get Me Naked 2: Electric Bugaloo," "Spritz!!Spritz!!" and "Let's Play Guitar in a Five Guitar Band." Minus the Bear's star is definitely rising.

You can see them this summer on the Gorge's second stage at the Sasquatch Festival with Modest Mouse, Death Cab for Cutie, The Flaming Lips, and Coldplay.