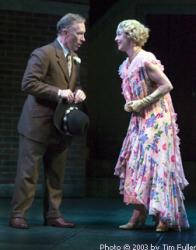 Over The Moon, Carlotta's Late Night Wing-Ding, The Crumple Zone

It's late-1920s Greenwich Village, and an aspiring artist named George (R. Hamilton Wright) is head-over-heels (today he'd be considered a stalker) for wealthy Molly (Liz McCarthy). Molly's snobby old stepmomma (Suzy Hunt) does not approve; Molly's funny daddy (Ken Ruta) has an Old West fetish and likes George because he's from Idaho; tight-assed British family butler Ferris (David Pichette, the funniest element of the play) doesn't like anybody. But despite these obstacles (and with the dubious help of a know-it-all author, a poet policeman, a reformed crook, a fortune teller, and a fast-fingered femme-fatale) George launches a series of wacky schemes to make his dream of marrying Molly come true.

Scenic designer Scott Weldin should be commended for his awe-inspiring, applause-inducing sets. The playwright, director, and actors should also be commended… if their goal was indeed to help the typical Rep demographic (old white people) conjure fond memories of their youths. That said, there's a certain comfort in starry-eyed farce, even when it includes dialogue like, "Well spank me with a skunk and call me Stinky!".

Despite the fluff factor, there's a lot to like about Over the Moon. Its sweet flavor doesn't linger long, but you're happy to savor it nonetheless.

Ingenious Troy Mink and the wacky Wing-Ding gang return for a pipin' fresh batch of Southern-fried holiday merriment. And, like last year, it's a fucking hoot. This season's gloriously cornpone song-and-dance show opener is "Be Our Guest" ("if you're stressed, it's the Wing-Ding we suggest"); the chaotic absurdity that follows will change every single week.

On opening weekend igLiz and I bore witness to:

Look, how can I express to you what a local treasure we have on our hands here? If you don't see the Holiday Wing-Ding, you are not my friend.

The Crumple Zone
thru 1/3, CHAC

Christmastime in the Staten Island apartment of gay roomies Terry (Greg Wolfson) and Alex (Matthew Darling) may be bright, but it ain't too merry. Alex's ridiculously hot boyfriend Matt (Matthew Gaine) is on the road touring in Dance of the Vampires; dumbass Alex has taken up with an intellectually-bankrupt twink named Buck (Joe Regelbrugge) in the meantime. Terry also lusts after Buck but has trouble finding a real date. It's no wonder why, considering how flamboyant and annoying he is, but that doesn't keep a creepy married roughian named Roger (Dennis Kleinsmith) from trying to get up in his Christmas tree skirt.

This story might have been more compelling if we hadn't already seen it play out in better soaps and farces. (Hello, plugging funny poofs into a standard romp doesn't make it distinctive.) But at its heart this is a melancholy holiday lamentation merely posing as a comedy; I was quite engaged by the end. For every tired-ass cliche ("I love you, but I'm not in love with you!") there's a truly hilarious one-liner ("This place is a wreck — all we need is some water and Shelley Winters and we got The Poseidon Adventure!"). I found myself explaining references to Joyce DeWitt, Mommie Dearest, and Elizabeth Montgomery to my (younger) theatre companion, who actually wound up liking The Crumple Zone more than I did. Draw conclusions accordingly.