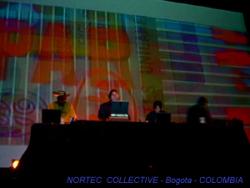 Having been invited to attend the Nortec Collective show with embracey and then realizing I had absolutely NO idea who the Nortec Collective were, I decided to do a little research. I borrowed my favorite IB's copy of their disc "The Tijuana Sessions Vol. 1" and was immediately hooked (I'll talk more about the music in a moment).

Once I got all the pop-ups closed I learned that The Nortec Collective is NOT a band name, group name, or even an artist's name. It is a collective of a variety of artists – musicians, graphic artists, architects, even fashion designers – who are promoting a new movement in music and art: Nortec. That is actually a hybrid of the words "norteño" (literally "of the north", generally referring to a traditional form of Mexican music out of Tijuana) and, of course, "techno." It is a blend of Old World and New World; of minimalist instruments and advanced technology; of sight and sound. And never have such seemingly disparate worlds collided with such extraordinary results.

Armed with my new knowledge ('cause knowledge is power!) I was very excited as we entered the Showbox. Embracey had been able to get us "on the list" and I was excited about being a "VIP" at this event. (Hey, it's not often a boy who steams milk for a living gets to be the VIP at anything!) After a little snafu at the ticket counter (first being told we "weren't on the list" then discovering we were listed as a strange amalgam of both of our last names) we proceeded directly to the VIP area, an elevated stage with its own bar and tables and chairs.

With warm-up tunes by Morcheeba pounding in my ears, I noted the stage: three huge screens, currently reflecting a simple blue background with a small videotape icon in the center; and a long table spread with computers, turntables, and lots of cords. While waiting for the show to start, we were greeted by lovely SIFF publicity guru Amanda Bedell, who informed us that her secret for keeping her sanity during the SIFF madness were Red Bull and a shopping spree at the Aveda counter. The thought that I could have missed this information had I not been a VIP chilled me… how much more had I missed in my "general admission" income bracket? While I pondered this, the screen began to flash images, the unmistakably nortec sound began to pulsate, and tonight's representatives of the Nortec Collective (Roberto Mendoza, Jose Morales, Ramon Amezcua, and Sergio Brown) took the stage.

There was something mysteriously, instantly captivating about them. The images, the sounds, the colors, the layers, all came together to form something (I've said it before, I'll say it again) extraordinary. I use that word because the on-screen images were often of everyday objects: billboards, graffiti, crowds, vehicles, faces, buildings. But the way the vibrant images were manipulated and mixed with the rhythms and hooks of the music made these ordinary objects extraordinary.

Most visuals presented with techno music are images for images' sake. At best, a much-needed diversion during a drug-induced state; at worst, an annoying distraction. But the Nortec Collective knew precisely what they wanted you to think and feel and combined the music and images accordingly. And it worked. The supposedly non-emotional, mechanical nature of techno suddenly became very engrossing, engaging, and emotional. Now I understood why the Seattle International Film Festival included it as one of their "Exploding Cinema" features. It was explosive.

From the moment they took the stage until the moment I left, I was completely engaged. I hardly remember seeing anyone or anything else during that time. The Nortec Collective is what the marriage of audio and video should be. I can only hope their next release includes an accompanying DVD. Forget self-promotional album-infomercial "music videos". I have seen the future of art, and it came from, of all places, Tijuana.