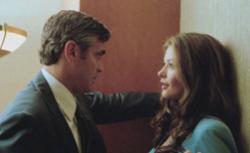 {Editor's note: I don't completely agree with Imaginary Harris' assessment of the new Coen Brothers film Intolerable Cruelty (I think it's definitely lackluster for the usually sparkling Coens, but not a totally wasted effort), and I certainly don't concur about Chicago being obnoxious (in fact, it was one of 2002's best films), but we're all about diversity of opinions here at TIG. That said, this isn't my review, and I accept no responsibility whatsoever for what you're about to read. —embracey, TIG film and theatre editor}

It's too easy to pan a movie, so normally I'd follow the caveat, "If you don't have anything nice to say…" However, in this case, I feel movie lovers should all be warned.

Many of us were curious when we saw the super slick trailer. First off, we saw that Catherine Zeta-Jones in a leading role (Is she allowed on the set of an arty film after the unbelievably obnoxious Chicago?).

We put this thought aside and momentarily pondered whether the Coens had lost their edge, and quickly shrugged the unwelcome thought away. It's got to be pretty good, right? Think again. Don't be foolish and spend good money on a movie ticket like I did. Now I know to trust my vapid-romantic-comedy-detecting instincts.

I always like the eye-candy of seeing big stars in swank surroundings and beautiful clothes, so it was semi-enjoyable seeing Zeta-Jones and Coen regular George Clooney fill the screen shot after shot as they syntactically sparred. Unfortunately, the verbal volleying falls flat, and there seemed to be few other shots. The speed of delivery seemed to suggest wit, but the words always landed short.

When the far-fetched plan is revealed, Massey is captivated by the beguiling nature of this ruthless woman. He falls for her, then he (and the movie) falls apart.

He realizes that he's been duped, and then he tries to re-dupe her. Plot and motive train wreck. Suddenly both of the characters start kissing to cover up that the story isn't really that clever.

I looked around at the other moviegoers in the dark for at this point, are they going to dare to roll credits. . . now? And yep, they decided to just put the film out of its misery when both characters ran out of tricks. The audience was the only duped party, apparently.

To make matters worse, the nature of the story demands many obligatory courtroom segments. The level of comedy is about as bright as Legally Blonde II.

I feel the need to figure out who was responsible for this. Perhaps producer Brian Grazer? You probably know Grazer best for Splash. Flash-forward thirty films to the behemoth A Beautiful Mind, along with an Amex commercial with best friend Ron Howard. Is he to blame for railroading the Coen Brothers and squeezing the artfulness out?

Small remnants of the Coens do exist. The film hints at some beloved quirkiness as it introduces Miles Massey with a tight closeup of George Clooney's teeth — lips pulled far back — as he finishes his whitening appointment. This white teeth obsession thing tries to mimic the brilliant "Dapper Dan Hair Gloss" theme of Clooney's character in Oh Brother, Where Art Thou?. Halfway through the Coens seem to acknowledge that it's not working and abandon this motif altogether.

Thankfully, the peripheral characters are halfway wonderful; a courtroom reporter underscores the inane, but the film's only truly funny bits included the hitman, "Wheezy Joe." He mistakes his asthma inhaler for his gun and blows his brains out.

Why couldn't we have had more of that?