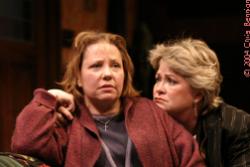 ”It’s a beautiful set,” Invisible Telle was saying about the comfy (fake) living room packed onto the intimate stage before us. ”Write that down. And they did a great job with the lighting — really beautiful. Not that I can tell or anything, because I’m invisible.”

So began a portion of our St. Patty’s Day 2004 adventure. We were at the Seattle Rep on opening night of the Leo K. Theatre’s season-premiere offering, The O’Conner Girls. And I agreed with IT — the set design (like the comfy-creaky abode of a cool great-aunt) and lighting (was that really sunlight peeking through the side window?) were darn near impeccable.

And my theatre companion’s wry observations didn’t stop there. ”Oh my God — Tom Skerritt is in the house!” And, in fact, he was, sitting several rows ahead of us. IT had already spotted John Aylward (better known to TV fans as Dr. Anspaugh from ER, but better known to me as E.G. in Down With Love) in the audience.

There was another A-lister in our midst as well, actually appearing in the play: Cynthia Lauren Tewes, aka Cruise Director Julie McCoy from The Love Boat!! (Invisible Telle: ”Well her career has really taken off!”)

A star-studded evening, let me tell you.

This is local actor/playwright Katie Forgette’s first professional production, and it’s an abundantly pleasant women-and-their-families piece of Anne Tyler-lite storytelling. There’s plenty of humor, some great one-liners, and lots of cool mid-20th-century film references. Christine Sumption’s direction is assured, and most of the performances (I won’t single anyone out, Julie) are very good.

But it was Altwies’ beguiling turn as the homespun small-town doc that really won me over – he brought back happy memories of Misalliance, another beautifully-designed Rep piece that he made even purtier. His O’Conner character reveals himself to one of the sisters in an irresistibly naturalistic way, wooing her in a manner that would make anyone fall in love with him.

If he keeps it up, he might just be the next Tom Skerritt.