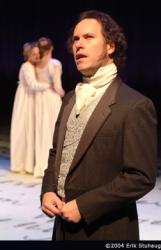 Pride and Prejudice
thru 2/15, Book-It Repertory Theatre at ACT

Resident Book-It Brit Marcus Goodwin's adaptation of the beloved 1813 Jane Austen novel returns to the Seattle stage for the first time in nearly four years. It's back by popular demand, and it's delightful.

Like many Austen works, this is a comedy of manners about class and courtship. It's the story of the Bennet family (the five unmarried Bennet daughters in particular), the society in which they live, and the unforgettable supporting characters they encounter, including the prideful Mister Darcy (Andrew de Rycke, pictured), monstrously self-centered Lady Catherine de Bourgh (fab-fierce Laura Ferri), and unctuous Reverend Collins (Brandon Whitehead).

But charming Bennet daughter Elizabeth eventually takes center stage, and Jennifer Lee Taylor is absolutely magnificent in the role. Her performance is appropriately sweet and strong, with an extraordinary anchoring spunkiness the part requires. I dare you not to like her.

Other cast shout-outs: Kelly Kitchens is superb in the dual role of Miss Bingley and the Housekeeper, hottie Colin Byrne is engaging (and immensely watchable) as Mr. Wickham and Captain Carter, and Megan Hill brings ribald hysteria to wild Bennett sister Lydia.

Jane Jones does a wonderful job in the director's chair of yet another gorgeous "Book-It style" piece, in which the performers put into action not only the dialogue of the book, but much of the narrative as well. (Goodwin, director of the 2000 production, was forced to step down this time 'round due to a scheduling conflict with his work at BBC London.)

This is a marvelous play, and if it starts feeling a little bit long at the 2.5-hour mark, don't fret — the sublime circle-dance finale is just minutes away. Go see it.

Röyksopp graced my ears as I entered the surprisingly cool Market Theatre on opening weekend of Seattle Neutrino Project's new run. The hexagonal SNP logo spun in front of frenetic accelerated-motion images of the downtown area around 1st and Pine (Showgirls® vicinity) flickering across a screen on the theater's small stage. Soon the cast filtered onto the stage to give a rundown of the evening's agenda.

Based on a theme determined by audience suggestion, SNP shoots, scores, edits, and projects an improvised movie before your very eyes; they purport to remove the boundaries between film, theatre, and improvisation. Tonight's insta-flick was named Tide Me a Prince (the re-arranged title of an audience member's favorite film), and involved three separate vignettes that (sort of) merged at the end:

I didn't find Tide Me a Prince quite as entertaining as Sleep (from last year's Fringe Fest run), but never knowing what you're gonna get is what makes Neutrino such a hoot. This is a talented group of folks bringing our city a brilliant and fresh theatre experience, and (Röyksopp or no) I'd love for SNP to become a permanent fixture around these parts. Go see it.