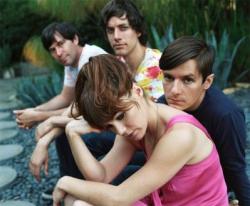 Rilo Kiley, with Tilly and the Wall

Okay, so this is my first imaginary assignment and it's like record breaking below zero weather — but I'm wearing my short-sleeved, super-hottie, sparkly, black, Imaginary t-shirt for luck regardless. The show is at Maxwell's in Hoboken, NJ, and I'm reviewing the Rilo Kiley (Blake and Jenny) acoustic set.

Because of the cold, I leave a little late and walk in as the second opening act, Tilly and the Wall, is wrapping up. This is quite unfortunate becuase what I did see totally rocked! If Sassy magazine existed today, we all would have seen Tilly and the Wall's completely cute and smiley faces in the Cute Band Alert section! They are awesome — they even have a tap dancer on stage!

Meghan (roommate) and I snag Tilly and the Wall pins and she lusts after the HOMEMADE Tilly and the Wall scarves (!!!) and we wish that we'd seen the rest of the set… but an interesting development diverts our attention as we're cruising and perusing the merch table. It seems a devoted Tilly follower has been talking to the merch guy and has gotten to know him so well that the feral fan can be introduced to the girls in Tilly and the Wall. It's a little endearing and so weird in an pseudo-sixth grade way that I just keep staring at the guy, embarrassed for him, as the girls smile back niceties and Rilo Kiley starts up. Our attention has been re-diverted!

But I can't see them!! They are sitting down! Everyone's head is in my way! And I am a tall girl! This never happens to me!

Even though it's probably trite-and-a-half to say that Jenny Lewis has the most amazing voice in the whole entire world — she has the most amazing voice in the whole entire world!! It literally commands the audience and practically licks the side of your face. I've only seen her once before with the Postal Service, but when she's part of the headlining band instead of the support crew, she really turns it out. Her voice makes everyone in the audience fall in love with her! The audience seems to respond to Jenny's voice more than to Blake's singing (he's awesome though, so funny and nice) and we're all having such a good time that no one cares that it's below freezing and we're packed like puppies in this tiny club.

It is, to put it simply, irresistible, and they're paying homage to the late, great Robert Palmer by singing "Simply Irresistible" — without irony. Everyone is singing along, and I turn to Meghan and whisper, "I feel like I'm at a Tori Amos show," because everyone is singing along to all the intense parts (like during "Go Ahead"s climatic, piss-off of, "if you want to have your cake and eat it too, and if you want to have other people watch you while you eat it.").

Meghan suggests that it might be the vast number of gay men hanging around or possibly it's the girls who tugged their boyfriends along (or the most obvious thing: Jenny's red hair) or maybe it's just the sense of DEVOTION hanging about in the air that I haven't felt since I was 17 — but Blake and Jenny are cool. The night has a homey feel to it, and there's even an old-fashioned sing-along with Tilly and the Wall and the audience for "With Arms Outstretched," and everyone's clapping at the special parts (for those who have rhythm, read: not me!) and given all the flashes that are going off during the show, one can surmise one of two things:

For whatever the reason, Rilo Kiley can sell out a show in New Jersey (a place where few Manhattan/Brooklyn-ites dare to go). They have a ton of charisma and really do something special for the audience. The night is sprinkled with the performer's folksy mid-western values. Between songs they thank the audience profusely for many things: listening, showing up, supporting the opening bands, etc., but what I love most about them is that for as many thank yous they drop during the course of the night, they spout out just as many fucks.

Now that, my imaginary friends, is a great fucking thing.