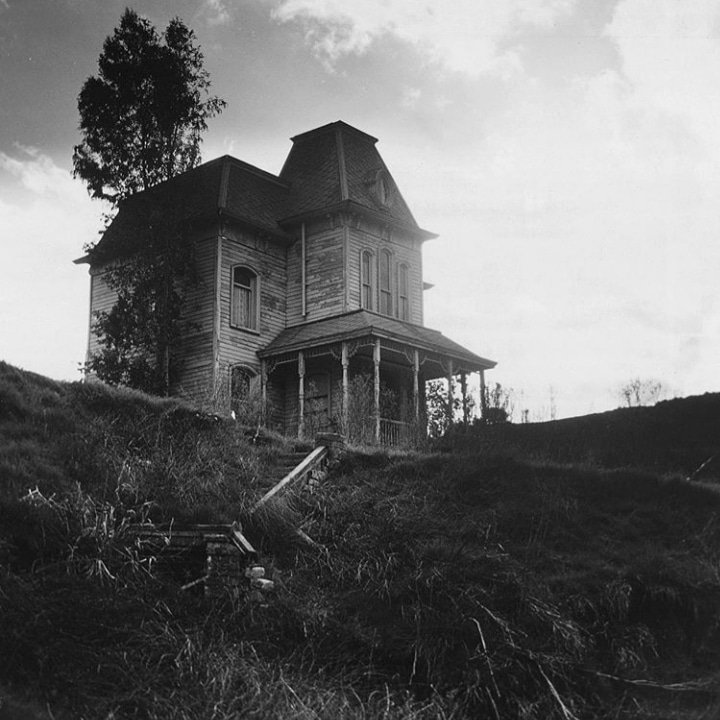 You can hear Imaginary Embracey, Imaginary Amie, and Imaginary Liz talk about Psycho on the June 24, 2019 episode of the Dead Beat Film Society podcast. Imaginary Liz is still in awe of this chat. The combined film expertise of the folks at DBFS and the imaginary film experts (Embracey and Amie) made for a brilliant (and fun!) look at this seminal film (go listen).

Alfred Hitchcock is my favorite filmmaker of all time, and Psycho is his greatest film. In the four decades since its original release it’s become part of our collective lexicon – and not just because one of the characters goes cuckoo for Cocoa Puffs, puts on his mother’s dress and slashes a woman to death in a motel shower. The film holds up because it’s a big honkin’ dose of truth about the human condition. We’re all trapped, it tells us. Find your own way to deal with it – but be careful which road you take.

It’s pointless to try to explain the hows and whys of Hitch’s cinematic achievement – the distinct brand of tension and shock and dread he forces upon his audience will never be fully understood. But watching his movies is hella fun. And getting the opportunity to see one on the big screen is cause for celebration.

Such an opportunity arose recently when the fabulous Egyptian Theatre screened Psycho as a weekend midnight selection. My escorts for the evening (Imaginary Girl Liz and non-imaginary Telle) had never seen the film. How this was possible, I cannot say – but attending the screening with a couple of Psycho virgins gave me fresh perspective (and a chance to witness undiluted reactions to the film’s twists, turns, and diabolical humor).

The movie begins with us, the audience, bustin’ up into a seedy Phoenix hotel where Marion Crane (Janet Leigh) and Sam Loomis (hunky John Gavin) are at the tail-end of a lunch-hour booty call. They’re sporting skivvies (risqué for a 1960 film), obsessing about the inappropriateness of the situation, and pawing each other’s fine soft flesh like there’s no tomorrow. (One wants to tell them to get a room, then one remembers that they already have.) We eventually find out that Sam is paying off his father’s debts and supporting his ex-wife, and therefore couldn’t be much of a provider for Marion – who makes it known that she would gladly lick the stamps for Sam’s alimony checks if given the opportunity.

Marion’s officemates are in their own little traps as well. A homely secretary (Patricia Hitchcock – no coinky-dink, she’s the Master’s daughter) deals with her insecurities by taking tranquilizers; the boss keeps a clandestine jug of hooch at his desk; a wealthy client feels that he can buy off unhappiness. He even suggests that he could help Marion out if the price was right, and later the insecure officemate utters the funniest line of the film: “He was flirting with you! I guess he must’ve noticed my wedding ring.”

Lovesick Marion gets it in her head to steal the client’s $40,000 cash, hightail it to California, and begin a new life with Sam. She has several chances to turn back (nosy police officer, droll car salesman), but it takes a conversation with motel owner Norman Bates (Anthony Perkins) for her to decide once and for all to step out of her trap. (She never gets the chance.)

The fascinating, lengthy Norman-Marion dialogue, which takes place in Norman’s creepy motel-office parlor, explains pretty much every thematic element of the film:

“We’re in our own private traps,” says Norman. “Sometimes we deliberately step into those traps,” replies Marion.

“Do you go out with friends?” asks Marion. “Well a boy’s best friend is his mother,” replies Norman.

“I bet you’ve never had an empty moment in your life,” offers Norman. “Only my share,” says Marion.

And on and on. All the while, bizarre stuffed birds watch every movement in the scene. Marion, who had overheard a terse conversation between Norman and his mother, suggests that he consider institutionalizing her. “But she’s harmless!” cries Norman. “As harmless as one of these stuffed birds!” Hmm.

You know the rest. Norman peeps at Marion through a hole in the wall, Mother kills her, Norman cleans up the mess. And the film is only one-third over.

Then it’s a whole other movie, the hero of which is: Norman Bates. Admit it, you want him to rid that bloody bathroom of every trace of Marion. You hope the car goes all the way to the bottom of the swamp. You get peeved when nosy detective Arbogast (Martin Balsam) comes snooping around, and his death in that crazy goth gingerbread house is a relief – despite the unnerving jolt of Mother’s surprise appearance.

(Editor’s note: I jumped right outta my seat and clung to embracey for dear life at this point. -igLiz)

One of the downsides to being so “embracey.” I had to go straight home after the movie and disinfect the claw marks on my arm.

(Wait, is it kosher to respond to editor’s notes? Oh well. Sorry about the violence that night but didn’t you even suggest my lack of scary movie experience yet promise that this was not going to freak me out? Anyway, I’m sure it was fine – I mean, you probably had some kind of ointment readily available. -igLiz)

(You had to do something to treat those fierce hickeys you showed me the day before. -igLiz)

ANYWAY, it’s all about Hitchcock making us identify with Norman. Marion has been the main character, she suddenly dies, we’re forced to side with this peculiar man – we don’t know he’s the killer yet. Then there’s the whole tranny twist. I wish I could have been in one of the original audiences back in 1960 – people’s reactions must have been priceless.

Hitch was just getting to be a household name at this time, despite the long and distinguished film career that preceded his masterpiece. It wasn’t until the TV series Alfred Hitchcock Presents hit the airwaves that he gained mainstream popularity. And technically, Psycho is an independent film – the studios were lukewarm to the weird ideas he wanted to convey (it was, after all, the late 50s when he pitched it), so Hitch financed it himself and used his TV production crew to shoot it in six weeks. The film cost $800,000 to make and grossed $15 million in its original release – a very impressive total for that period.

I’ve seen Psycho numerous times, and each viewing reveals new depth and detail. I came away from this screening with the realization that only one character deals with her traps the right way – by tirelessly seeking truth. Lila Crane (the criminally under-appreciated Vera Miles) emerges as a role model for us all – she lets nothing stand in the way of discovering what happened to her sister, even when it means confronting the demons in that dark, dank fruit cellar.

Way to be Zen, Mr. Hitchcock.