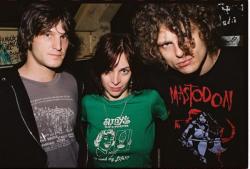 The Ruby Doe, Burning Brides, The Catheters, The Division of Laura Lee

It's good to see that there's finally a Helmet-influenced band out there with both the attitude and the aptitude to pull it off. I want to go see them again.

{Hey, hey, hey… Michael X, don't leave so soon. After all, you and I agreed that The Ruby Doe performance was the tightest, most intense of the four star, four band evening and how knocked out we were that here they had been around town all this time and this was the first time we crossed paths with them. Here you are the FIRST Imaginary Boy – the fellow that set the bar for all those that followed you… I mean that White Stripes album review you just did? Classic. The Drop's interview review thing? Unforgettable. So when you said that you would write a review for this show, gosh I was excited to read your recap of it. Oh… you're right, you did say all those things I just spouted above… and you also said how we want to see them again. Ok, all that was covered above. Good job. -igLiz}

As any guitarist will attest, when you first start learning to play, you find yourself stumbling over dozens of iterations of ridiculously simplistic chord progressions that you abandon as soon as you figure out what the hell you are doing. Fortunately for those who don't play guitar, there is a band who did not throw them away.

{I think this is one of those few instances in which it pays off to not be a guitar player… because I enjoyed Burning Brides quite a bit. Once I grabbed on to that Nirvana-esque torch they were carrying and got past the lead singer's American Idol-esque hair, I remembered that their album Fall of the Plastic Empire is a solid piece of work. And that bass player… she was anything but rudimentary. She was able to force people to get over the fact that she was so hot by not only setting the rhythm section straight, but by not overtly using her minimal costume for attention. And they did that "Glass Slipper" song that is the rock 'n roll toe-tapper. Sure, there wasn't much intensity to their performance. But THEY sweat a lot and there are worse ways to fill the time until the Division of Laura Lee. So, yea, Michael X, your points are all valid. Good job. -igLiz}

They pretty much don't suck.

{Agreed. I got distracted in the bar for this set. You're dead on with this one. Good job. -igLiz}

The Division of Laura Lee

They're from Gothenburg. That's in Sweden. Gothenburg, Sweden, to be precise. I guess that's pretty important, from what the band says. Judging from this performance, I'm not sure Sweden ever bought the Nirvana record.

{I was so excited that The Division of Laura Lee were scheduled for a stop in our fair city. I LOVE their album Blackcity. Love it. It is so menacing and seductive. It collects pieces of Jesus and Mary Chain, Girls Against Boys… well, you get it. They are part of that richly decadent derivative guitar band movement sweeping the states.

So you can understand my surprise when they took the stage and started in on their first song and they were really… really… not that way visually. I guess I've been spoiled by folks that play the part like the Hives, Interpol and Black Rebel Motorcycle Club. Sure, DOLL put on a good show – full of energy and the lot. But their sound came out more of a garage band… and honestly, like a cover band version of themselves. So yes, Michael X, I am glad you brought up that homeland question. Is the Division of Laura Lee from Sweden? I posed this question to some of our trustier friends at the show:

JAKE: I thought the whole night of bands was kind of weird. I don't believe that Laura Lee was really from Sweden. They looked like they were from Oklahoma. I told Wayne that this claim of motherland Sweden was a scam to get better gigs. After the show I overhead them talking to some fans and I am telling you that there was NO accent!

JILL: They are from Sweden, but want to be very American in a "two wild & crazy guys" way, – but are too goofy to be disco. I LOVE that the lead singer is not pretty, has a pot belly & a three inch gap in his teeth – he is probably an asshole as well, which makes me love them all the more.

ROBERT: Hmmm….maybe they are really from Sweden…Sweden, Maine, that is. Right down the road from Slab City, a rock 'n roll town if there ever was one. There's also a Sweden, NY, which is near Rochester (or should that be ROCK-chester?). Maine is prettier, though, so I'm going with Maine.

So, we all agree with you. No Swedish Nirvana records, important performance. Good job. -igLiz}