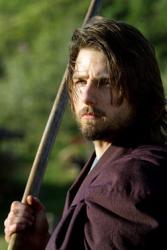 In the week leading up to the release of The Last Samurai, I discovered a common feeling among my friends: an inexplicable hatred of Tom Cruise. Not because of the frat boy smirk, or even his ridiculous popularity. There's just… something.

This Tom Cruisiness is restrained — for the most part — in The Last Samurai, a period piece focusing on Japan's push for modernization at the expense of its past traditions. A substantial portion of the film is in Japanese with English subtitles, and the film's (thankfully) minor spotlight on American foreign policy helps sidestep many potential failures.

We begin as Tom Cruise's shell-shocked Civil War "hero" Nathan Algren follows his wallet to Japan to train soldiers and drink himself to death. An ensuing (and quite remarkable) jungle battle begins the centerpiece of the film, a section I call Tom Cruise Studies Abroad; as a loosely guarded captive, Algren learns Japanese, flirts and eats with the locals, and begins to find himself as he comes to appreciate the alien culture. While Edward Zwick's direction is nothing original, the film is finely paced here and includes a great surprise ninja clash, with notably fine performances by Ken Watanabe and Koyuki.

But as is to be expected, we must rush toward the climax, complete with a rousing Hans Zimmer score, meaningful slo-mo shots everywhere, and lots of tears shed over honor and destiny. Despite the weakness of the script and the horrible last moments of the film, there are some brilliant flashes, such as when Algren's samurai training becomes instinctual as he wards off a group of fierce guards. Even this, though, is couched by a derisive subplot about a book being written to historicize this epic period in Japan's past — a weak excuse to superficially credit the film with historical accuracy and relevance. The Last Samurai is a bit uneven, but for all the ways it could have gone wrong, I'll give it the benefit of the doubt.