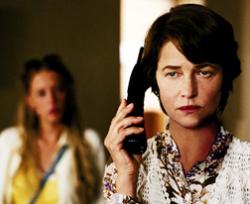 François Ozon is not a household name in the United States, and probably never will be. But I'm here to tell you that the eclectic French filmmaker to whom that moniker belongs has produced some of the most vibrant, disturbing, original cinema of the past decade. If you haven't seen his ruthless and wacky Sitcom, languorously tense Under The Sand, or Fassbinderly kinky Water Drops on Burning Rocks, get 'em in your SPL or Netflix queue post-haste.

Ozon will probably reach his largest audience to date with Swimming Pool (opening July 11 at a Landmark Theatre near you), his first-ever English-language film. It's a sensual and beautifully peculiar suspense flick about… well, yes, a swimming pool. In particular, the one at a South-of-France summer home owned by London mystery novelist Sarah Morton's agent. Charlotte Rampling (also perfect in Under The Sand) is spot-on fabulous as disgruntled, writer's-block-stricken Sarah, who hopes some time away from the gloomy city and its incessant demands will give her some much-needed solitude (damn those pesky fans on the Tube!) and help revitalize a drying wellspring of creative juices.

Well, juices get flowin' all right, but it's not exactly what fussy, uptight Sarah had in mind.

It all starts one hot, uncomfortable night with the arrival of an unanticipated housemate – the agent's late-teen tart of a daughter Julie (fierce and lovely Ludivine Sagnier, advancing a notch from ensemble roles in Ozon's Water Drops and 8 Women). Her wild, youthful ways (crankin' the tunes a little too loud, bringing home an endless parade of disgustingly creepy fuck-buddies) are on poor Sarah's nerves at first, but eventually the two women form a borderline-psycho bond of obsession, control, and more than a little mom-daughter role warpege.

What I love most about this film is that it knows what it means to be a writer – someone who often requires solitude and retreat, and sometimes a little extraneous nudge, to fill the empty Word document before her. In an early scene, Sarah sits down to begin writing and a weird egg-shaped sculpture situated on a dresser across the room catches her eye; we're shown that it seems to give her inspiration (an idea hatches, if you will). And after Julie's arrival, there's a wonderful scene of blissful, glorious creative breakthrough via the open floodgates of a newly-fertile mind. It's marvelous to behold.

Soon Sarah is cranking out pages like nobody's business. Then Julie snoops and isn't at all happy with whatever it is that Sarah has written, and, as an indirect result, a murder takes place. Sarah's subsequent investigation makes for fascinating cinema – it's like an artful, bizarre episode of Murder She Wrote (though I don't think Jessica Fletcher ever had to deal with a secretive midget), and a perfect example of the film's icy, menacing, Hitchcockian allure.

The shocking denouement is certain to infuriate some, and I honestly wonder whether one has to be a writer to understand it. The creative process, you see, often entails some chimerical touch-ups to the mundane – and the mundane just isn't something that François Ozon lets you live with for long.