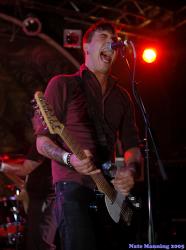 By some inexplicable turn of fate, Graceland was freakishly empty on the Saturday night I ventured out from behind my computer to go see Verona.

I arrived early and caught the last couple of songs by the opening band. Kyle Logghe (lead singer) was not only front and center during his set, but he was also front and center in the audience for the opening-"to be reviewed at a later date"-band, Roy. It was local-music-scene-camaraderie at its best. I was flushed with warm fuzzies.

Once I realized I made up one-fifth of the audience, I was a wee-bit frightened there was a music extravaganza happening somewhere else that I was not told about. Possibly reading the bubble over my head, Kyle laughed and stated, "Well, it's not the size of the crowd that counts, it's the quality" before launching into their first song.

Crowded or not, Verona confirmed that Graceland was the place to be. Their music flowed from one beautiful extreme to another; thick, layered guitars were conjoined with deep vocals, which instantaneously changed to aggressive rock guitar and borderline yelling vocals. Which provides me with a perfect segue to Kyle's teeth. Someone get me the name of that boy's dentist because those pearly gems are so gorgeous and white, it hurts — a lot.

By the third song, the five people in the audience had expanded to 30. The drums were surgically precise and unobtrusive. The bass blended the guitars and drums together seamlessly. The second guitar player expertly filled in the musical gaps when Kyle was looking too cute to strum.

Kyle definitely explores the far corners of his vocal abilities. In one song, he chanted like a news broadcaster and then belted out at the least expected moment with his {now trademarked} "K.L. sexy scream®". The only pre-K.L. sexy scream® warning he gave to his audience was his backing up from the microphone a couple of inches {those teeth and he's concerned about his audiences aural health? — what a gem!}. By the end of the set, I found myself hitting my proverbial fork handles on the table and chanting {in my head, of course}, "scream, scream!" Kyle was the only one with a microphone, but was entertaining in his lone stage bantering. After one vocally exhausting song, he stated, "I've already gone through puberty, I should really stop trying to hit that note."

Seek out a Verona show soon, or sign up for their mailing list and receive friendly show updates delivered conveniently in your inbox. Spending 20 minutes with those teeth is well worth the seven-ish dollar investment.