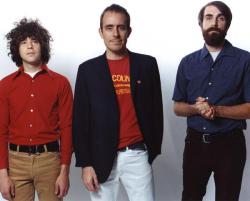 Ted Leo and the Pharmacists, with Hint Hint and The Cripples

With 2003 only one-quarter finished, it may be too early for such a proclamation, but come December I'm certain that you'll still hear me testify that Hearts of Oak by Ted Leo and the Pharmacists is one of the best records of the year.

Imagine a record that satisfies just about every indie rock jones you've got: mod punk ("Where Have All The Rude Boys Gone?"), noisy, shouted rants ("The Ballad of the Sin Eater"), lovely Smokey Robinson-inspired chord changes ("First To Finish, Last To Start"); you freaking name it, it's there. There's even a song that sounds a bit like A Flock of Seagulls! Ted Leo's ambitious sonic evolution—from the straight-up hardcore punk of Citizens Arrest to the Jam-meets-Hüsker Dü diversity of Chisel—covers its widest range to date with Hearts of Oak. And it's fine if you don't believe me now, but ask me again in December, okay?

When Ted Leo and the Pharmacists stepped on stage at Graceland (minus their keyboard player, who was sick), they got right to business, launching into a performance that was energetic, heartfelt, and just a little rough around the edges. The band tore through three songs back-to-back without much breath in between. Not that Leo was ignoring the crowd: during the first breather he encouraged audience participation, and even passed out tambourines for people to shake along with the band. The adoring crowd relished the opportunity to help out (respectfully taking turns sharing the few instruments that were passed out) and shook, rattled, and pogoed with abandon.

The band's articulate lyrics were political without preaching, angry without sounding bitter, and, as if that isn't accomplishment enough, the songs were sometimes funny. And when words failed him, Ted knew exactly when to hit a perfect falsetto "yah-ee-yah-hahhh" or a playful "oo-ee-oo." I loved watching the band having a good time, despite chronic string-breaking and tuning issues. By the time the tambourine got passed to me, I was ready to shake, shake, shake!

The show's defining moment: the guitar-less "The Ballad of the Sin Eater." Over a relentless bass riff and a heavy drum stomp, Ted climbed on top of the monitor at the front of the stage and spun a free-association story (channeling Bob Dylan lyrically but sounding eerily like Sonic Youth's Lee Ranaldo) about conviction, doubt, and a world-wide search for a decent place to sleep. Ted Leo, you'll always have a place to rest in my list of Top Ten Records of 2003.

Now I need to tell you about my crush band, Hint Hint. Hint Hint warmed the stage for Ted Leo and the Pharmacists, and when I say warm I mean "hott!" Now this is a hometown band to watch, both career-wise (their new 6-song ep Sex Is Everything was just released on Cold Crush Records) and visually. Hint Hint literally pouts on stage (especially the very bored-looking keyboard player Leona Marrs), lead singer/keyboardist Peter Quirk sings like a punked-out Pee-Wee Herman with a broken nose and he twitches like David Byrne on poppers.

I don't understand a word Quirk says, and yah his vogueing is a little mannered, but hell it sure gets me dancing anyway. Deftly combining everything that could sound so wrong—those vocals, new wave-as-punk guitars, bass lines played on a keyboard—Hint Hint make it all sound so right. This is a band that knows how to groove. And they KNOW they know how to groove. Hint Hint have my money for "Most Likely To Take the NW Music Scene by a Storm."

Opening band The Cripples, another fine, fine local band, have been carving a name for themselves in Seattle's indie/electro/punk subset for several beautifully noisy years. This is a fantastic band to see live, and they've got one of the tightest (and sweetest) boy-girl rhythm sections I've ever heard (and seen). The Cripples play pop songs skewered by the band's twisted mentality (what other band can curl the word "contraception" into a rousing singalong chorus?) and by their sly rebellion against the "two guys with guitars" indie rock cliché. Instead, twin front men Greg and Ross Cripple wield strapped-on handled keyboards and build on the nerd-punk history computed from equal parts Devo, Japanese noise bands, and 60's garage. The Cripples twist dials, machines whine, and everybody has a good time. Their debut CD Dirty Head is out now on Dirtnap Records.