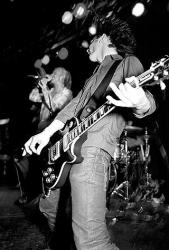 These Arms Are Snakes

I'm not sure what's bothering These Arms Are Snakes, but whatever it is, we're all the better for it. These seem like angry young men who have a lot to get off their collective chest. We're not talking about watered down teen-angsty rock either. These guys cook up a musical stew that would make The Melvins and Neurosis proud.

A sense of dark and foreboding doom n' gloom hovers over their tracks. The lead singer has a tremendous rock voice and isn't afraid to wash it in numerous effects. He freely raises his voice octaves above his own or reduces it to guttural lows. In addition to his vocal talents, he also has an unmistakable charisma. Like the band's namesake, he slithers around the mikestand and flails about the stage like a madman in an effort to convert the audience to their cause. The other members hold their own as well.

This is one of the more inspired outfits to come out of Seattle in awhile. They have the potential and the necessary ingredients to gain a large cult following. Consider yourself warned.

See them March 4th at Graceland with The Blood Brothers. This goes far beyond a casual suggestion…