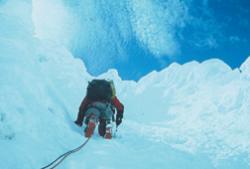 "If you don't make decisions, you're stuffed."

OK, mountain climbing is not for me. There is no damn way I'm gonna use ice-axes and weird spikey shoes to climb a straight-up ice-covered wall of rock, dig a snowcave in the side of a big ol' mountain to sleep in at night, and melt snow over a lil' gas heater to have something to drink. Oh hell naw.

But some people are actually into this stuff, despite potential disasters like those explored in the new documentary Touching the Void. My imaginary former roommate Tim (who is outdoorsy, and who himself has a nice-sized ice-axe, hehehe) accompanied me to a recent screening of the film.

It's about Joe Simpson and Simon Yates, two Brits who in 1985 set out to climb a super-snowy 21,000-foot mountain in the Peruvian Andes. They reached the top (the first people ever to do so) in 3.5 days, and during the descent, guess what? Yeah, disaster. Joe fell and broke several bones in his right leg. So Simon wound up lowering Joe down the mountain 300 agonizing feet at a time. And then, guess what? Yeah, more disaster. Simon unknowingly lowered his injured pal over the edge of a deep crevasse!

Eventually Simon realized he was faced with a dilemma: hang on to the rope and let 'em both die, or cut it (for all he knew, Joe was already dead anyway) and try to save his own ass. Guess what? He cut the rope. And guess what else? Joe actually survived (!) and is still around to tell his tale!

And what a tale it is. Director Kevin Macdonald, who won an Oscar for 2000's riveting One Day in September, intercuts interview footage of Simpson and Yates with shockingly real re-enactments of their horrifying experiences; most were actually filmed on location right there in the Peruvian Andes. The result is a gruelingly physical film, but a beautiful one as well — Mike Eley's photography is simply outstanding.

Tim, having recently consumed two grande Budweisers at La Cocina, could be heard at various points during the screening murmuring things like, "aw damn", "jeez", "holy shit", and "whoa". The next day he was a bit more coherent: "That film should be shown to every kid in America. We'd have a country of overachievers — good for the nation, bad for Jerry Springer."

A recommendation even the non-outdoorsy among us can understand.