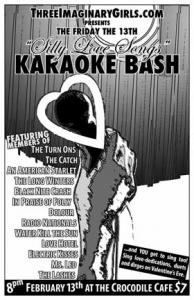 And those with a record contract aren’t the only ones invited to profess their love {or lack thereof} on the Croc's stage. All attendees are invited to participate. Whether love-lorn or beloved, attendees are in for more treats than a bag of Necco candy hearts!

For example, the happily married Sean Nelson {of The Long Winters and Harvey Danger} has promised to karaoke, "…two nakedly prostrated lover-to-beloved love songs, which will nonetheless be dirge-like because of the bittersweet nature of all love, which is sacrifice."

And poor single Ben Lashes of The Lashes: he claims his search for Ms. Right has been met with obstacles and restraining orders. But that hasn't stopped him. He has promised to karaoke a Cure song because, "…girls love the Cure." He’s hopeful he will find a girlfriend at the party when star-stuck Cure-fan females recognize that he and Robert Smith share a haircut.

Need more reason to attend? Shane Tutmarc of Dolour intends to perform a love dirge. "I sing for the broken-hearted!" he proclaimed.

Imaginary girl Dana explains, "We're encouraging love duets, dedications, and dirges, because really — how often does the day before Valentine's Day fall on Friday the 13th? We couldn't pass up that opportunity."

"Who knows, it could turn into an indie-rock night of speed dating AND replace those expensive Valentine’s Day dinners that so many couples fall prey to," said imaginary girl Liz.

"We hope someone gets engaged onstage that night," said imaginary girl Char. "That would rock."

Three Imaginary Girls are no strangers to the Seattle rock scene. During the past 18 months, the girls have reviewed hundreds of shows in Seattle and beyond. They also book local music showcases, and have hosted various rockstar karaoke events, such as their first anniversary suicide karaoke celebration, a Labor Day buttrock karaoke party, and an indie-rock holiday party that raised hundreds of dollars for local charity, TreehouseForKids.org.