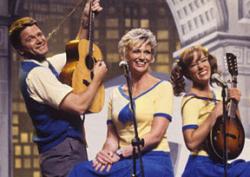 A Mighty Wind and Confidence

Stop calling me anti-American. I do see domestic cinema from time to time — I mean, the best film of 2002 was made right here in the US of A. The recent release A Mighty Wind and the upcoming Confidence (April 25) were too, and they're worth a less urgent gander. Nowhere near the league of recently reviewed Euro-flicks to be sure, but I saw 'em and kinda liked 'em. You might too!

Well any good citizen with a lick of sense knows to get excited when actor/writer/director Christopher Guest gets ready to bust out another dose of mockumentary magic. We love us some This is Spinal Tap, Waiting for Guffman, and Best in Show, so I won't waste screen space praising them to high heaven.

With A Mighty Wind he takes on the world of Baez-style folkpop. You know – Peter Paul & Mary stuff. What could be more American? Like Guest's other mock-docs, the film's comic tone is the product of Second City and SCTV, with the wacky characters and punch lines, the not-so-subtle nudges at human nature. Plot hinges on a public-broadcast Manhattan concert that brings together forgotten icons like the Folksmen (Guest, Michael McKean, and Mr. Burns himself, Harry Shearer); Mitch and Mickey (Eugene Levy and a surprisingly melancholy Catherine O'Hara); and the New Main Street Singers, led by perky and perturbed Terry Bohner (John Michael Higgins) and including his former-porn-queen wife, Laurie (Jane Lynch), and mandolin player Sissy (criminally under-utilized Parker Posey).

It's good, but not great. A little more strained, a little less funny than I wanted. Oh sure — there are hysterical moments (I thought igLiz was suffering a stroke when Shearer's character was abruptly dismissed from his lengthy on-stage history rant; a desperate party-convo line about model trains had Imaginary Taigan and me yellin' laughin') and enough less-intense chuckles to warrant shelling out a few clams. I imagine the DVD will be big fun — no overpowering waves of audience guffawing to drown the subtler comedy.

Speaking of subtlety, Ed Burns is a hottie. But does he have the range to play anything other than a manifestation of his Brothers McMullen character? Doubtful, but oh well — I'm sure there are plenty more movies to be made about cute Long Islandy thirty-something boys. In Confidence that would be professional grifter Jake Vig, who gets a motley crew together to con a flamboyant kingpin (Dustin Hoffman) outta millions. A federal agent (the almost unrecognizable Andy Garcia) is on their tail – and may or may not be involved in the con himself.

What could be more American?