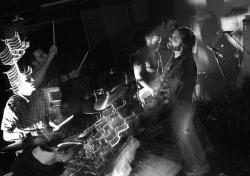 I was randomly fortunate enough to make it to the last ever performance of KEXP's 'The Live Room' on Saturday, August 24, to see Portland band Woke Up Falling tear up the airwaves. It was a joyous yet dolorous occasion, as Cheryl Waters, Abe Beeson, and company said goodbye to a nine-year tradition. There was a lot of cake, and a lot more beer, and plenty of rock and roll.

I have been meaning to see Woke Up Falling ever since I first heard last year's Dividing Blue from Blue, out on M-Theory Records. Now I am sad that I didn't see them before. Jack Straw Studios is not the optimal live arena, and I have to admit that mainly what I saw around the pillar that found a seat right in front of me (isn't that always the way?) was Abe's goofy grin and the back of the bassist's head (great neck, by the way!).

But the music certainly kept me entertained. According to singer/guitarist Gordie Muscutt, the band have not had a chance to write much new material since releasing Blue, but their relentless touring shows up in the old songs, which have taken on new life after myriad rehashings. The old songs reflect a much more mature sound that has left me longing for their new album (which will tentatively be recorded NEXT Summer).

To describe the band would be a disservice to them. I keep hearing the term "Emo" and wondering what the hell it is, but if it weren't already something, I would certainly apply it to Woke Up Falling. Think Juno with a little less contempt for the music they play (and a lot more melody).

Definitely the most entertaining part of the show for this recovering college student was in the songs that they were able to continue to play long after the coda had gone away. (I don't want to say they jammed, because who does that? But something we all could learn from Kinski is that sometimes it's okay to just make cool sounds for awhile. Fans who come to the show already have the record, so they don't need to hear it. And those who aren't familiar with the band won't know the difference anyway.)

But the band does a superb job of providing a unique live experience, especially when they… I just learned that, due to technical difficulties, the show did not air last Saturday, but will be on this Saturday (August 31) instead. So I don't want to spoil it. Just listen.