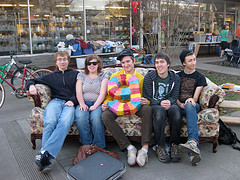 To mark the night, we set up the bands on the evening's bill on a date of sorts so that we can get to know a bit about those participating. In this imaginary interview installment, Dr. David Nixon of "Awesome" interviewed Zach and Jon of iji.

"Awesome":  What was the first concert that each of you ever went to?  How old were you?  What happened?

Zach: The First concert I ever went to was James Taylor at The Cricket Pavilion in Tempe, Arizona with my parents. I was about ten years old and my dad pointed out someone smoking pot out of an apple. I don't remember the concert much but the apple thing blew my mind.

Jon:  My first concert was Buck-O-Nine at CSUN (California State University Northridge) with my brother Ryan. It was sponsored by the big southern CA rock radio station KROQ. Shaggy also played and some others that I don't remember, we only saw Buck-O-Nine. It was where my brother taught me how to skank, ya know, SKA.

"Awesome":  What are some of the non-musical influences on your music?

Zach:  This is sort of a newer influence but lately I have been thinking about youth allot, like young feelings and ideas… The kind of thing that would have given you goose bumps when you were 15. But there are allot of other things too. My obsession with Woody Allen movies for example. Or dogs (any of them).

"Awesome":  I sort of want to ask about the origins of the band, but sometimes those facts are boring. But as time goes on, origin stories can begin to take on more meaning.  Eventually some of the facts are stretched. And then, give or take a couple of hundred years, the stories grow into fantastical myths. In a way, these myths, though completely fake, are able to express what is at the heart of  the band's coming together  better than the boring actual stories.  What would your origin myth be — you know, after a couple of hundred years of re-telling?

Zach:  It all started with sea foam actually (which, if you don't already know, is made of dead mermaids). The story is long but involves a seagull drinking some particularly green sea foam and sprouting human legs and arms. The human/seagull hybrid spent the next few years walking from the bottom to the very top of the west coast. When he reached the town of seattle he was planted in some fresh soil and grew apples. These apples fell to the ground and rotted and then learned to play guitar. The End.

"Awesome":  David Byrne's voice was never exactly, um, "good" in the classical sense.  But he embraced his weird vocal style and turned what might have been a depressing liability into a charming and unique asset.   I think a lot of great artists are like that. Maybe Jackson Pollock had difficulty painting in the lines.  Maybe William S. Burroughs just didn't have enough focus for a linear narrative.  The Presidents of the USA probably couldn't afford a full set of strings.  What are some of your embraceable liabilities?

Zach:  I don't know if this is the kind of thing you are supposed to talk about. Maybe you should tell us after the show?

"Awesome":  We've done very little touring ourselves, but when I think about bands touring, there's two pictures that come to mind:  1. Led Zeppelin throwing furniture out of the windows of their fancy hotels, and 2. the Sex Pistols playing every dive bar in the South where no one would know (or like) them.   What's your dream tour look like?

Zach:  We have done allot of touring over the years with different line ups and I feel like every tour we go on is pretty much everything I could wish for. Everyday is such an amazing adventure and every night you are introduced to 10-50 kids who love music as much as you do. That is my dream tour and that is why I try and spend at least 3 or 4 months out of every year touring.

"Awesome":  Lester Bangs once said that rock is dying and would be replaced by video games.  Accept your fate: What kind of video game would iji be?

Zach:  iji is a videogame. Google that shit (but note that I named the band long before the game was made). Most of us really love the game Super Smash Bros, although I imagine that an iji video game would be less violent.