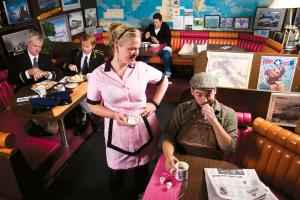 To mark the night, we set up the bands on the evening's bill on a date of sorts so that we can get to know a bit about those participating. In this imaginary interview installment, iji interviewed Sean/Chris/Cori/Jeff/Jenny of Tullycraft. Finally we'll get a bit of insight as to why their Top of the Croc show will be their last Seattle show (at least for some time).

iji: Who do you think your kidding with this "We Are Breaking Up" thing? Please tell us it's just a big publicity stunt.

Chris: The nationwide outcry has been quite flattering and almost has us reconsidering.

Jeff: We have a publicist?

Sean: I’m not aware of any outcry. We're breaking up?

Jenny:  The singer's always the last to know…

Corianton: Jeff and I need more time to work on our death metal side project, "Heavy Petting."

Sean: I’ve heard some of those demos. I’m not sure I’d go so far as to call them “death metal.”

iji: You always manage to name drop tons of really obscure bands in your songs with out coming off completely pretentious. How do you manage that?

Chris: If we're not coming off as pretentious you're just probably not getting it!

Sean: Do The Decemberists come off as pretentious?

iji: You talk a lot of trash about other bands in your songs. (For example, Mates of State and Orange Cake Mix.) Has there ever been any confrontation or rebuttal? Do you think you could take them in hand to hand combat?

Chris: HTH (or H2H) is our specialty! When we're not crafting underground classics we're pretty focused on our combat sports.

Jeff: I will hit you right now!!

Sean: I don’t think we’ve limited our trash talk to just songs. Unfortunately, I think some of the bands we’ve poked fun at may have taken it the wrong way. Fortunately, Jenny is proficient in a variety of hand-held weapons used in medieval tournament events, so we're good.

Jenny: Actually, Jeff's hair is our secret weapon. Have you seen it? It's gorgeous.

Chris: I honestly cannot believe the poor quality control on some of our recorded output, it's almost unforgivable, but at least most of it's free!

Sean: Over the years I think we’ve been a bit “creative” at times during the recording process. For example: at one point, Chris set a cheese grater between the microphone and Cori’s guitar amp. At the time we thought it sounded cool, but I’m not so sure anymore.

Corianton: But afterwards we made spaghetti with fresh grated parmesan, so who's the real winner?

Sean: I had forgotten about that.

Jeff: I thought that was a zen saying at first. "What's the sound of one hand clapping?" "If a tree falls in the woods…" You know. But then I was thinking if I had a taco would I put a block of cheese on it or would I like to have it shredded. And I thought shredded would be better. But really the best tacos come with that crumbly cotija cheese, right? So then I looked at it from a different angle and thought maybe this person is saying that they have a bad internet connection and the sound is clipped as if the sound is actually being rocessed through a cheese grater and they are only getting little bits of the song at a time. I'm sure that's quite annoying and this person was probably looking for help troubleshooting the problem. I'm not very technically savvy but maybe they could just check the sound card in the computer, check the speaker connections and wire or take the fucking cheese grater off of the computer speaker. Now I'm hungry or tacos. Is it lunchtime yet?

iji: So, since Tullycraft won't be playing anymore shows (which we still don't buy), does that mean we can expect some Crayon or Six Cents and Natalie shows anytime soon? What about at least some fancy re-releases?

Jeff: Hey! Whoa, calm down champ. Re-releases? Re-unions? Aren't you a little young to be living so far in the past? Let's just get through the next show.

Sean: Will there be Crayon or Six Cents and Natalie shows anytime soon? No. As far as re-issues, I’m not sure there’s really a market for a fancy re-release of the “City of Subarus” album. Would people really want to hear the outtakes from those sessions?

iji: Tell us a secret. You can trust us.

Chris: Sean shaves with an electric razor in back of the van.

Corianton: I've shaved in the back of the van too. But not my face.

Jeff: Your breath smells. It's always good to carry a pack of gum with you. Here, have a stick.

Sean: Why are we always shaving in the van?

Jenny: I have a strict "no body hair" policy and I'm not afraid to enforce it!