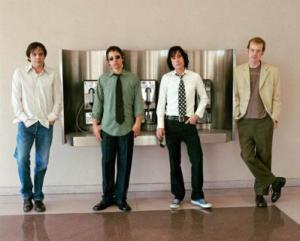 ChrisB December 17, 2008 no Comments
For as long as I’ve been a “serious” music fan, one of my favorite bands was Fountains of Wayne, the powerpop band from New Jersey whose songs are often about socially awkward characters trying to find their place in the real world – although best known for their single “Stacy’s Mom”. When I found out that the band was set to embark on a short, acoustic tour at the beginning of 2009 (including a stop on January 15 at the Triple Door here in Seattle), I jumped at the opportunity to interview songwriter/bassist Adam Schlesinger, where we discussed his band, its future and the songwriting process.

With two songwriters in Fountains of Wayne, you and Chris Collingwood, how do you write songs together?

Well, we don’t really collaborate in songwriting anymore. Even though we still share the songwriting credits, most of the songs are either my songs entirely or his songs entirely and we work on them in the studio. Someone else might have a suggestion or two about a line but we don’t really collaborate anymore. We did when we started the band but now we live in different states.

I really enjoy FOW songs because the characters are easy to relate to, at least in my own life. Are they autobiographical in any way?

I write songs about made-up characters but there might be details I include from my own life. Chris writes some songs like “Valley Winter Song” which is his and about his home. The diary-like songs are mostly his.

There are a lot of timely, pop culture references in your songs. For example, “Someone to Love” references characters that watch “King of Queens” and listen to Coldplay. Do you worry about when those references fade from the cultural memory?

Yeah, it’s true those songs are very of the moment sometimes but I remember listening to Beatles or Kinks songs as a kid and not knowing what those songs meant but to me, they’re grounded in a particular time or place.

FOW’s biggest hit is probably “Stacy’s Mom”, was there anything that stood out when you were making it that made you think it could be a hit?

At that point we felt like we had written a bunch of songs that we thought were good. We had just gotten lucky with that one. In fact, when we made that record, Welcome Interstate Managers, we didn’t even have a record deal. We just made the record on our own and when we were done we put together three or four songs and sent them to record companies. “Stacy’s Mom” was one of them. The people who heard it didn’t think it was a hit song. We got lucky and one guy that heard it thought it could be a hit and he was the one who gave us a deal and spent some money to give us a shot.

But you never know with that stuff. I don’t think we set out to write a hit; we always set out to write catchy songs and we just cross our fingers and hope the stars align and one of them does better than the rest. It was just one of those songs people started hearing and requesting it on radio stations and you began hearing it more and more. It’s a different world now. I don’t know if that would happen in 2009.

Do you feel any pressure to make another hit like that?

Right now we’re just making a conscious effort to make stuff we like and feel comfortable playing. We’re lucky in that over the twelve years we’ve been able to develop a small, but loyal, fan base. We’re just trying to count on them and we’re not trying to have a top 40 hit every time. It would be nice but for us, it is more important that we make records we like.

Are there any songs that are your favorites or that you are particularly proud of?

There are a lot that I really like and there are some that are fun to play each night. There are some songs that we’ve pretty played since we started the band that I still enjoying playing. “Radiation Vibe” is obviously one of them. That’s a song Chris wrote but it is the song that pretty much started the band. I just thought it was amazing and still love playing it every night.

For me, the most satisfying part of writing a song is if you have an off-beat idea and you struggle with it for a while and ultimately it comes together. There are some songs for me like “All Kinds of Time”, from Welcome Interstate Managers, that we don’t play it live much but I’m really proud of it because I think it’s a really strange idea for a song and somehow it ends up being kind of moving in the end. You never know when that’s going to happen. It’s a terrible idea on paper – it’s about a football player and there’s no particular reason why this song should have come out. It didn’t have any emotional resonance but when all the music came together, it gave the song much more weight than I expected.

That’s another thing with songwriting. I often start off with a lyrical idea first then take musical ideas with it; but it really is interesting how words and music interact. A song may look a certain way on paper but when you hear it on top of a certain melody, it has a whole new meaning than what you might expect. I think that is what happened with that song.

As you said earlier, you and Chris both live in different states, how do you write now?

We just get together for like a week or so in the studio and work with what got and try some stuff out. Even if a tune doesn’t knock us out on an acoustic guitar, we’ll still play around with it.

I remember when Chris brought in “Red Dragon Tattoo” and he was down on it and kind of embarrassed about it but we all really liked it and wanted to give it a shot. After jamming on it for a bit we came up with a different approach then what he might have had in his head and then he got excited about it too and it ended up becoming a staple song for us.

How do the other members of the band, drummer Brian Young and guitarist Jody Porter, fit in to the songwriting process?

Well, up to this point, we’ve been the sole songwriters but I don’t want to minimize their contributions. As we’ve grown as a band, I think Chris and I have gotten more comfortable leaving more to chance in the studio. There are a lot of times where one of those guys will offer a part that really alters the song. It might be a guitar part from Jody or a drum part from Brian, but their contributions are essential. It’s really nice having four guys that really get along because our instincts are all similar in terms of what works best for us and the band. They have definitely brought in a lot of crucial ideas.

What is going on with the next Fountains of Wayne record?

We started a new record and have been in the studio for a few months here and there but we probably have a way to go. We’re playing some shows at the beginning of the year to try out some of the new songs. That and it’ll be nice to get out of New York during the winter.