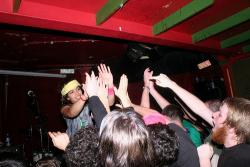 Memory Rarely Satisfies – An Evening with the Thermals

My love affair with the Thermals has been long standing. My first band played with them their very first show in Washington at a Planned Parenthood benefit on the WWU campus. By the time they hit the stage, pretty much everyone had left and my bandmates and our handful of friends that were left discovered our new favorite band that night.

I've watched as the Thermals grew into the unstoppable force they've become. One of the last times I saw them was in Chicago at a sold out $15 show the night before a free show in Grant Park. I stood up in the balcony (normally I'm up front spazzing out and screaming along) and was nearly in tears as I watched an entire audience sing along to even old b-sides. My heart was swollen with pride.

So, I couldn't wait to see them at Chop Suey. I'd been almost anxious all week about it; wondering what the new songs would be like, wondering how Hutch would be able to play guitar after nearly cutting off his fingers. But, as I've said before, the Thermals do not disappoint, and they did not.

Before they started playing, they came on stage as their own roadies, dressed in over-sized 80's band t-shirts (some with pillows under them to make it look like they had a beer gut) with fake facial hair and sunglasses donning flashlights and loudly checking mics and drums (which was possibly the cutest thing ever). After changing back into their normal outfits, they graced the stage for real and started blowing the audience away with an action packed 25 song set, including the world premier of many songs off their upcoming Kill Rock Stars release.

From the tone of all the new songs, I could tell that this new release was going to be a breakup record, featuring lines like "I knew I could love or die/I let it go!". Another new song, "How We Fade" was a slow jam worthy of putting on a sideways hat (and Hutch did). All in all, the new songs sounded similar Fuckin' A, and kept mostly to the under or around the two to three minute classic Thermals rule.

As for the classics, I'm always amazed when I notice the crowd making the same hand motions I always have during songs (like the "two two three, three two three" in "How We Know"). In fact, the crowd was so into the set, that Hutch called everyone "deliciously rowdy", and commented how awesome the guy up front with a cast on each arm was. "Deliciously rowdy" was a bit of an understatement, and I was thanking my lucky stars that I'd snuck in up front on the side and missed most of the swirling, slamming brutality (though, I still had several bruises the next day). The crowd even moshed during "Test Pattern", their slowest and prettiest song to date.

I know a lot of people who start getting upset when their favorite bands become famous, or the shows become too hectic or too big, but for some reason, I just get prouder and prouder of the Thermals. I hope they end up conquering the world, and I'll do my best to stand right up front, singing along the whole way.