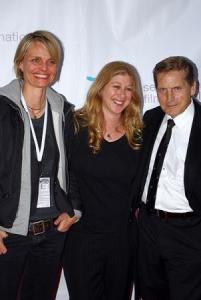 The film Little Joe is a one-person documentary that tells the story of Joe Dallesandro, an actor most known for his starring role in many of Andy Warhol’s films, including Flesh, Trash, and Lonesome Cowboys. The documentary is a fascinating portrait of the Warhol superstar who shares many of his most interesting stories as he tells how the chance meeting with Warhol shaped his life and career.

For many years, he had one of the most iconic images, with his likeness appearing on the cover of The Rolling Stones’ Sticky Fingers, as well as The Smiths’ debut, self-titled album. The director John Waters said he “forever changed male sexuality on the screen”. After moving on from films with Warhol, Dallesandro worked with other notable directors like Francis Ford Coppola, Waters and Steven Soderbergh and was immortalized in the Lou Reed hit song "Walk on the Wild Side".

Just a couple of hours before Little Joe premiered at the Seattle International Film Festival, I sat down with Joe Dallesandro and the film’s director, Nicole Hauesser. We talked about making the film, getting permission to use all of the rare footage and photos featured in the movie and working with one of the most notable artists of the twentieth century.

How did the idea for this film come about?

Nicole Hauesser: It origination with Vedra (Mehagian Dallesandro), Joe’s daughter. After Joe wrote an article for a book called Letters to the Next Generation, he and Vedra started working on it and I got involved much later.

This film is told only through Joe’s perspective, no one else is interviewed. How did you make the decision to only feature Joe?

Nicole: There were so many different versions. I think at one point were people interested in giving us a big budget and let us shoot on film and wanted to finance it but they wanted to wait until after Joe wasn’t around anymore. Then we just decided to do it ourselves and that was how it came about. Joe said “they can make that film when I’m dead.” We decided to ask him the questions instead of asking other people. I also thought we had to either get many people or just have Joe tell his story.

What kind of reaction have you gotten from showing the film to audiences?

Nicole: We just premiered the film in Berlin in February. It was a wonderful experience; it was very well received, we had gotten some great write-ups. This is our North American premiere and hopefully we’ll have the same reaction.

Berlin was a different experience though because Joe received the Teddy Award for his contribution to gay cinema. It was very exciting for him because a very small film was received like that.

Joe, in the film you talk about not having an ambition to become an actor and that your meeting Paul Morrissey and Andy Warhol was a fluke.

Joe Dallesandro: Yeah, that has been my story forever and it’s the truth. I showed up at a place to meet someone who did Campbell Soup and I thought I was going to get a meal but those were the paintings that Andy made. He was behind a camera with a newspaper and reached out with his hand and turned the camera on or off if he heard something funny and that was Andy’s idea of shooting a film.

Paul Morrissey would run around giving the characters in front of the camera directions on what he wanted them to do. He approached me and said he wanted me to be in the film. It was a homemade movie and I said sure and did a small scene with them and that was the beginning of my career with the Warhol people.

Being the youngest person in the film, they used my picture to advertise the movie. They said “put Joe in another one” and I’m a real easy-going guy to work with. Paul called me up and said “we’re doing a cowboy movie, would you like to go to Arizona?” I said “sure, I’ll be a cowboy.” I was young and had lots of time. It was a learning experience working on the film. There wasn’t a desire to be an actor but it was pointed out to me by someone that I trusted that what I was doing was good and I decided to listen to him and take direction from them on what they wanted me to do and I became better at it.

Were you aware of Andy Warhol and who he was prior to meeting him?

In the film you talked about Warhol films not having a consistent story but after you stopped making films with Warhol and Paul Morrissey you began making films with other directors that had more conventional stories. Was that what you expected filmmaking to be?

Joe: It’s two different types of films. What I was doing with Paul and Andy was like my school, my learning how to be an actor. Improvising dialogue was one of the other things that I did. Later on in Europe and later, everything I did was scripted and I added my talent to the story.

I thought the things I did with Paul were more like documentaries because I put so much of myself into them.

Your likeness has been iconic for many, many years. Do you still find images you had forgotten about or hadn’t seen before?

Joe: I run a MySpace that has a lot of friends on the site and a lot of fans and they sometimes have photographs, many I haven’t seen before. Someone called me this morning before I left (for Seattle) and found this film I had been asking about and someone else in the film traced it down after I left for Europe. I remember it being a short where I played a psychiatrist. I had never seen it before, so I’m getting a copy sent to me and I’ll see it for the first time.

There are a ton of images of Joe in this film, was there any difficulty in getting those cleared to be used in the film?

Nicole: Because we did this for no money, it was DIY and everyone we approached was willing to donate everything: the stills, the music. It definitely took us a while to track everybody because not everyone has websites. Making this film would have been much harder ten years ago, without the internet (being what it is today).

Were there any images you wanted to use but couldn’t?

Nicole: Almost everything we wanted we were able to track down and get for free but there was one image we wanted to use but they wouldn’t let us. It was the Avedon Foundation, who was not helpful at all. I’m not sad to say it but they were not nice; they were the only ones. Everyone else said “this is great, oh my God, we love Joe, I’m so happy you’re doing this, here is everything we have”.

A few times fans sent us stuff, too. I don’t know if you remember in the film that there is a lot of Super-8 shot from above where Joe and Paul Morrissey are standing on the steps of a brownstone in New York. Someone in Austin came up to Vedra and said they had this footage of Joe and Paul Morrissey, shot out of a window when they lived next door.

There was a lot of “found footage”, which I really loved.