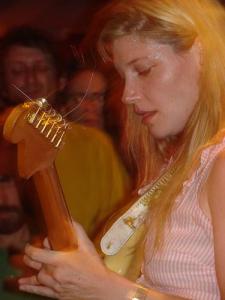 Marnie Stern’s latest album, This is It and I am It and You are It and So is That and He is It and She is It and It is It and That is That was just released this month on Kill Rock Stars to rave reviews from places like Pitchfork, The Onion's AV Club and Blender. It is an intense and challenging record from an amazingly talented (and remarkably humble) guitarist. She has a unique, finger-tapping style that is far more progressive (and advanced) than you are likely to hear from many of her indie rock contemporaries.

She is preparing to tour in November with Gang Gang Dance – and that tour includes a stop at Seattle’s elegant Triple Door on November 10. She took some time out of her day, before a band practice, to answer my phone call and discuss the stunning new record, working with some of her favorite artists, and being part of the remarkable Kill Rock Stars roster, amongst other things.

How does this new album compare to your first album, 2007’s In Advance of the Broken Arm?

I think this one is definitely more song-oriented. I focused a lot more on song structure. I used a lot more restraint with this one, with regard to the guitar parts.

Was the recording process different for this new album?

Actually no, we did it the exact same way. I recorded it at home on my Pro Tools and I sent the material to (producer/drummer) Zach (Hill) and he put the drum parts in. Then we did a lot over over-dubs. I redid a lot of the guitar parts and the vocals. This time we redid almost everything but the process was pretty much the same.

How did you end up on Kill Rock Stars?

I sent my demo in to the label a few years in a row. After the second year, Slim Moon contacted me and said he was interested in having a meeting with me. So it was really fortuitous and I was really lucky in that way.

KRS has always been my favorite label. They really have one of the most impressive roster of artists, releasing albums by people like Sleater-Kinney, Elliott Smith and a lot of riot grrrl bands

Me too, me too. That’s why I sent it in to them. Slim is also one of the guys who listen to all of the demos he gets. I think that is fantastic because a lot of labels won’t listen to the demos. That’s terrific that he listened to it and got back to me.

Was KRS a hands-off label to work for?

Oh completely. One hundred percent. They let me do what I wanted creatively. That’s why they are such a wonderful label. It really is a family with a handful of bands. Portia Sabin, who runs the label now, is really fantastic about getting in touch and finding out what is going on. Everyone there cares a lot about their bands.

Last time I saw you play was in SXSW in 2007 and it was only you on stage and your “band” was your iPod clipped to your belt. Are you going to tour with a live band this time?

Yeah. Last summer I did a tour with a live band. Zach Hill and Robbie Moncrief, from The Advantage. That was really great. This time Zach is working on a solo record so I am going out with a drummer named Jim Sykes, who used to play in Parts & Labor and another guitarist named Mark Shippy, who used to play in U.S. Maple, one of my all-time favorite bands and a guy named Matt Papich, who plays in a band called Ecstatic Sunshine.

That should be really interesting to see you play with another guitarist on stage.

There’s actually going to be two other guitarists. That’s a lot of guitar!

You have one of the most distinctive sounds as a guitarist. How did you learn to play? It doesn’t seem like your finger-tapping method would be taught by a lot of instructors.

I was self-taught. I never really took any lessons. I took a few when I was fifteen and the teacher taught me how to play “Every Breath You Take” by The Police and that was it for the lessons. Then I just started taking my time, trying to figure stuff out. Basically, I found my sound through fumbling around for a really long time. It took a long time for me to find my style and sound. It pretty much happened on its own from chipping away and working on it from a different angle.

There are some things I’m better at now and others not so much. It is frustrating that people keep labeling me as a guitar virtuoso and I certainly am not. I think of myself as a songwriter first and foremost. I think I’m alright as a guitar player but certainly not what people make me out to be. That kind of makes me uncomfortable.

I think that is all justified. Anyway, how did you meet up with Zach and end up working with him?

Hella was my favorite band and when Slim was still working at the label he asked me who I would most like to work with if I could work with any drummer. I immediately said Zach Hill. So Slim and the label approached him and asked if he would work on the record. He said he would if he could produce it because, I think, he wanted to get in to producing. That was really a milestone for me, being so thankful and lucky to work with someone I admire so much. I still feel that way.

I really liked how the drum parts came out on this record. I thought you really got the sense that he was such an explosive drummer.

I do, too. I think, in terms of restraint, we both did a good job of holding back a little and wanting the songs to stand out again.

Where did the title of your record come from? It is 31 words long, if I counted correctly.

Zach came up with it. I had no idea that a long title would be such a huge deal. I really didn’t.

We were mulling around titles for a long time, probably about three weeks. I had come up with a bunch but none were sticking. Then I came up with one and it was taken. There’s a database with song and album titles you can search. They were all taken. Then we finished the record and Zach came up with the title and it was really positive and great so we used it. I just assumed people would refer to it as This is It. I think it is more of a thing for journalists who have to fit it in.

I think we like it because it inflates our word counts.

Who did the artwork on this album? It is very bright and pretty and makes for good contrast with the music that is inside.

That was by the artist Bella Foster, who did the artwork for my first album as well. I think her work is so fantastic, so moving, emotive and colorful. She did the art and I couldn’t be more thrilled with it.

I just read in an interview with Pitchfork that you are working on a project with Mary Timony. I really admire her so I think that is amazing. How is that working out?

Yeah, I really liked her work for a really long time. She’s just such a talented guitar player and a great vocalist. She is just so wonderful. I suggested we do a project together and when she said yes I felt really honored. For the past year, off and on, we have been sending material back and forth. I was supposed to go to her house and record in September but we were both so busy. We have a whole batch of songs to work on.

Would you ever release them as an album?

I don’t know. We never talked about doing that. It’s mostly been a fun project for the both of us, but we’ll see.

You know that she had a collaboration with Carrie Brownstein (guitarist from Sleater-Kinney) called The Spells and they released an EP several years back.

Really? I’ve never heard that but I’d love to hear it.

We’re going to start recording, definitely after this tour, but we’ll get to it.