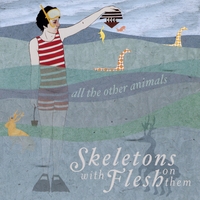 Imaginary Interview: Skeletons with Flesh on Them

The up and coming band Skeletons with Flesh on Them has just released their debut album. It is a jangly pop opus that is chock-full of ultra catchy songs that sound definitively Seattle. Their contemporary musical style is both upbeat and dynamic. In a brief correspondence with singer and guitarist, Scott Roots, he has allowed us into the the world of the Skeletons, past, present and future.

Tell me about your new record. How did it come together and how was it recorded?

As a band, we were really concerned with making an album, not just stringing together songs and giving it a title. To help allow ideas to breathe and develop, we recorded the tracks in two sessions spread out over 6 months. We constantly revised the songs up to the point that they were recorded, and then [revised them] again when it came time to mix. Our producer Jeremy Park was insanely attentive to detail to the extent that he sent us up to 10 different mixes of each song before we agreed on a final version. We wanted each song to have a unique identity within the framework of a thematically consistent set of songs.

Did you have to gamble at all or take any risks to get what you wanted with the new album?

I’d say one of the biggest risks we took was in who we chose to record our album. To work with Jeremy again, who recorded our EP in 2007, meant having to work remotely, since he had moved to Idaho. We considered a ton of different options before making a more or less gut decision to go with him. While it meant the expense of travel and rigid date-planning, it was more than made up for with the passion and energy he put into the songs. We are lucky to consider him a fifth Skeleton.

What are you listening to lately and what kind of impact has it had on your songwriting/recording?

When I am listening to a song, I am often listening for the singer’s phrasing and melody, and what separates a really [memorable] performance from a forgettable [one]. Over the last couple years, I’ve been particularly drawn to Craig Finn (The Hold Steady) and Will Sheff (Okkervil River) for their ability to tell interesting stories within the framework of rock and pop songs. Other artists that come to mind are John Darnielle (The Mountain Goats), Isaac Brock (Modest Mouse), Jeremy Enigk (Sunny Day Real Estate), Jeff Mangum (Neutral Milk Hotel) and Matt Berninger (The National).

Do you have any plans to tour soon? What kind of crap food do you envision yourself eating while on the road?

We are set to hit the road at the end of July for a 10 day tour down to California with Stencil. It’s our first tour, and now definitely feels like the right time to go. As far as junk food, I have heard horror stories of bands living off of white-powdered doughnuts and jalepeno taquitos for weeks on end, and as much as I hate to admit it, such will probably be our fate. There is something so alluring and exotic about the 7-11 taquito.

Skeletons should be huge in Seattle. What can Three Imaginary Girls do to make certain that this degree of world domination soon occurs?

You could give us a really good quotable phrase for our Myspace. Maybe you could write something like: “Three Imaginary Girls hereby demands that you purchase Skeletons with Flesh on Them’s new album because they are the best possible band, even if you consider an infinite amount of bands for infinity”.

What shows do you have coming up in town and where will you be performing?

How did you settle on the band name, Skeletons with Flesh on Them?

It was around 2003, and I was delivering pizzas in Madison, Wisconsin. After a night of particular heavy drinking, the phrase popped in my head and I couldn’t get it out. I thought it was the wackiest image in the world, that everyone was really a skeleton underneath all those clothes and skin, and I liked the way it sounded. As far as naming the band, it really was one of those intuitive things where I didn’t give it much consideration. As with song-writing, I put a great deal of trust in subconscious processes to work things out without the brain actually ever catching on.

Where can Three Imaginary Girls’ faithful find your new CD entitled All the Other Animals?

In Seattle at Easy Street and Sonic Boom, online at iTunes, CD Baby, and Amazon. You can also get it directly from us, with information about that on our Myspace page.

I would like to thank you for all the work you do supporting the scene, Three Imaginary Girls. Thank you!