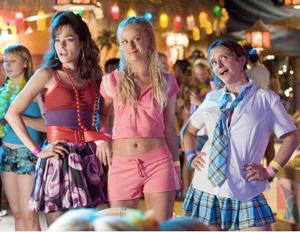 Spring Breakdown is a very funny comedy where its three female stars (Rachel Dratch, Amy Poehler and Parker Posey) find themselves at Spring Break. It recently screened at the Seattle International Film Festival and the crowd loved it at the Friday night screening I attended.

The film was carried by Poehler and Dratch, who are two great comedic talents and are two of the funniest cast members of “Saturday Night Live” over the past several seasons.

One of the film’s stars, Rachel Dratch, the director, Ryan Shiraki (Dratch and Shiraki also wrote the film together) and a producer, Larry Kennar, sat down with me while they were in town for SIFF to discuss Spring Breakdown. It was easily the most fun interview I’ve ever conducted.

I believe you explained at the screening last night that this film was produced by Warner Independent, but then they folded and left this film without distribution.

Ryan Shiraki: We were supposed to be released by Warner Independent but it was assassinated by Warner proper so we were in limbo for a while. And then it played at Sundance…

Larry Kennar: When Warner Independent closed, it fell under big Warner and it became the stepchild of the studio and we played it at Sundance and two other studios wanted to buy it but Warner wouldn’t let it go and they decided to try a new version of distribution where it’ll play on iTunes and VOD and be in stores on June 2 and there is a great viral promotion going on with it and it’s going to be seen by a lot of people and that’s what’s most important to us.

Where did the idea for the film come about?

Rachel Dratch: I think Ryan and I were chatting about just how hard it is for a woman to be…

RD: We were seeing a lot of comedies that all featured men and tried to write one of those comedies that featured women because it’s not like someone was just going to come along and hand me a script – although that is the fantasy, so we started talking about a situation that can be a broad and goofy comedy. A lot of times women’s movies as comedies are “chick flicks” – things are all about girls getting the guys, so we wanted to do something goofy and straight-up comedic.

What I enjoyed about his film was how you and Amy Poehler worked together and I’m not sure I would have enjoyed it if the same parts were played by actresses who aren’t as funny as you two are.

RD: Amy and I both came out of Chicago, Second City and Improv Olympics. I didn’t know her that well but we both had the same sort of training and then we both ended up in New York and on SNL together and became friends in real life. We really do hang out and crack each other up. You can see, I hope, that we’re good friends off-screen, too. There’s a comedic shorthand and we’d work together and come up with lines.

We were also really lucky to get Parker Posey involved as well. She’s done all of those Christopher Guest movies, she’s familiar with the whole improv, on-screen thing, so she fit right in.

This isn’t a terribly original idea, it’s one that had been done many times before, often poorly…

RS: That’s sort of the idea. It’s about taking what is typically a male genre and giving it some estrogen.

Did you say last night that you were working on this film since 2006?

RS: Yeah, Rachel and I conceived it as an idea and tinkered with the script for a while and then would go off and do something else and then we would come back to it and then the timing of it worked out really well. She was free and Amy was free and Warner was like “oh, make it; here’s a penny and five weeks”. (laughs) It all worked out and we could have just kept going on with the script if we didn’t have a deadline.

Working with Rachel was really neat. We’d do one scene and go grab a burger and maybe do another…

Weren’t you just leaving SNL around that time? Wasn’t 2006 your final season?

RD: I think I finished up SNL and we shot it in the summer.

What are you working on now?

RD: You guys are working on an HBO thing…

LK: Right, we’re working on a pilot for a series called “Ladies”. It’s like “Golden Girls” with three African-American comedians in their fifties.

LK: Oh, the comedy is just nasty. (all laugh) And then we have a comedy called Alpha Moms at Warner with Katherine Heigl, sort of Mean Girls with moms trying to get their young kids into schools – kindergarten admissions, cutthroat admissions. It’s really funny. And Rachel is in the new Nia Vardalos film.

RD: Yeah, it’s called My Life in Ruins and it comes out June 5. And then I don’t know. I’ve been doing a musical. It’s supposed to go to Broadway in December. It’s called Minsky. It’s by (writer Bob Martin), well, if you’re not a New Yorker (you may not know who he is). He did a musical called Drowsy Chaperone, which was up for a bunch of Tonys – and the music is by Charles Strouse, who did the music to Annie and Bye Bye Birdie – a couple of veterans there. It’s supposed to be in the winter but you never know in this business.

LK: We’re developing other things for Rachel as well, so…

RD: I have yet to be informed of this.

LK: And there’s a series called “Racine, Raylene and Reece” and it has the same structure as “Summer Heights High”. There’s three different characters she’s going to play.

LK: It’s like “The Little Engine that Could” and keeps chugging along.

Did you crack each other up when you were making this movie? Like you’re doing right now…

RD: Sometimes we’d crack each other up and other times we’d want to rip each other’s hair out – like when we couldn’t crack the code of a scene. I am used to writing sketches on SNL, so I could write a funny scene. The thing that is hard with movies is there’s a whole structure. Ryan is more of a structure guy.

RS: It was always “loving pains” or “growing pains”, but it was so much fun working with Rachel. Right from the beginning we were like “this is not rocket science”. It’s not going to be The Reader, we’re going to be okay if we can make ourselves laugh. We were playing to our own tastes.

Last night when you introduced the film you said you hoped everyone in the crowd was a little drunk before seeing it. You got a very warm reaction from the crowd, did you expect that?

RD: Yeah, it was a really good crowd. When I saw it at Sundance, it was at midnight and it was a lot of industry people and Hollywood insiders. Here it was more fun to see it with regular people.

I thought the crowd was atypical for a SIFF audience, which often resembles the Marshall McLuhan scene in Annie Hall…

…but this audience seemed to be made up of a lot of broad comedy and SNL fans.

RS: It was a great crowd last night – and that’s who we wrote the movie for. We didn’t write it for agents one, two and three or publicists four, five and six. We wanted it to play to people who are thoughtful and appreciate a good joke.