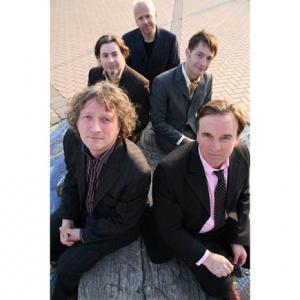 Squeeze is the hugely influential British powerpop band that made its name during the late 1970s and 1980s with such hits as “Black Coffee in Bed”, “Tempted”, “Cool for Cats” and “Up the Junction”. The band is known as a partnership between Chris Difford and Glenn Tilbrook, and has often compared to Lennon and McCartney. Difford primarily wrote the lyrics to Squeeze’s songs while Tilbrook wrote the music.

The band reunited in 2007 and is currently in the middle of a tour of the United States (including a stop at the Showbox at the Market on September 16). Chris Difford took some time out of his busy schedule to take my phone call and discuss the band’s legacy, songwriting, and his own solo record that was just released earlier this year called The Last Temptation of Chris.

You’ve been working with Glenn Tilbrook for something like 35 years now. How do you make it work for so long?

Yeah, that’s quite a bit of time but we’ve had our ups and downs. We’ve been apart and we’ve been back together. I think that if there is a reason that has kept us going it is that we both began to understand that we both need our own spaces and when you appreciate each other’s space you appreciate the coming together as well. I was just thinking about this today, that when we get back from this tour we probably won’t see each other for seven or eight months yet we’ve been almost in each other’s pockets for the past month. For Squeeze, we’re either here or not here.

What made you decide to get back together?

We were promoting a greatest hits package back in the UK and it seemed relevant to the both of us to go back out on the road because more than anything, I think we realized how amazing our catalogue has been and it was about time we went out and showed everybody what we felt.

Was it always planned that you wrote the lyrics and Glenn wrote the melodies for Squeeze songs?

It was just synergy, really. When we started, I was writing the lyrics and Glenn was writing the music. It might change when we get back together again because Glenn is writing his own lyrics for his own songs. I could see an album that has his lyrics as well as mine.

Are you writing any new Squeeze songs?

Mainly, I’ve been writing my own songs or songs for other people. Squeeze hasn’t really come into it. I haven’t written anything with Glenn or Squeeze in mind for like nine years. It would be really interesting to open up that old briefcase with all the old Squeeze stuff in it, though.

What is going on with your solo careers?

Well, Glenn is just having his own album out next as we speak and that’s going to be really exciting and my own album has already been out so we have to go out and support that and then sort of clear the path so we can go out and do some Squeeze stuff next year.

Are you going to tour the US to support your new solo record, The Last Temptation of Chris?

I’d really like to, but to be quite honest, touring sounds a lot easier than it actually is. It is actually quite difficult to come to America right now. It is such a big place to make any sense out of it. You have to be here for at least a month or two. It is quite fun once you get your head in the right space. Glenn has got more of the ability to tour for long periods of time than I do.

It seems like there is a lot more humor in your new record than Squeeze fans may be accustomed to. Your record is called The Last Temptation of Chris and the song “Fat as a Fiddle” is particularly funny. Was there something different with writing this record?

I was writing with a friend of mine, Boo Hewerdine, and he is a very light-hearted person to work with. For me it was really comfortable and a great place to be, working with him. He kind of drew out of me that kind of humor. There is a different energy working with Boo. He is a very lovely man he’s got some really great records.

What else have you been working on between your solo records and Squeeze?

I’ve been doing personal stuff at home and I put together writing workshops. I’ve been organizing those, which is quite good fun. The next one is in two or three week’s time. In fact, as soon as I get back I’m going to be teaching songwriting. I’m going to go back to school as a writer/teacher teaching songwriting. There’s always something going on.

One of the signature Squeeze songs is “Black Coffee in Bed”, where did the inspiration for those lyrics come from?

Basically, my notepad had a coffee stain on it and when I went to write that song, I looked down and there was this coffee stain. It conjured up the image that became that lyric. All of the lyrics I wrote come from something similar. When I sit down to write, I focus on whatever is happening at that particular time.

What can Squeeze fans expect from the upcoming shows on this tour?

I think people will be surprised at how much we go back in time. We play lots of stuff from Argybargy and from the Cool for Cats album. We kind of miss out on a whole period of Squeeze, which would be the nineties. It’s good for us to venture back and forth. We’ve got like thirteen records to pull from. I must say, I’m really happy to be in a band that has a catalogue like that. It is really, really great. We can go back and forth.

How is this tour going right now?

It is going very well, very fruitful. We are playing for a lot of people and we are enjoying ourselves. That’s really the best thing you can hope for.