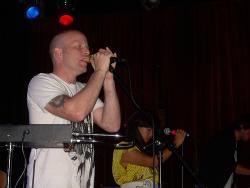 A few years ago, I remember going to see James Murphy (of LCD Soundsystem fame) and The Juan MacLean DJ at Chop Suey and the room was nearly empty. It was even harder for my awkward, non-dancing self to hide stay inconspicuous and hardly an enjoyable night for anyone involved. I’ve also seen LCD Soundsystem twice with a full band and both times were electric. Both times the Showbox was packed and the streets were lined with people desperate to get in and I would be willing to bet very, very few people went home feeling let down.

When I found out that The Juan MacLean would be playing a show at Nectar with a full band, I was anxious and a little apprehensive. I knew it would fall somewhere in between my experiences with seeing DFA Records acts in person. Would it be closer to the former (the cavernous room at Chop Suey) or the latter, the packed LCD Soundsystem shows at the Showbox?

Fortunately, the night turned out very well and the show was a lot of fun and a great time.

John MacLean, who uses the stage name The Juan MacLean, mines similar territory as his friend and labelmate Murphy and LCD Soundsystem. They both make rock music accessible for the dance floor. Or maybe they make disco accessible for rock clubs?

The big difference is in their sets is the equipment. The Juan MacLean’s setup was MacLean on a synthesizer (and theremin), another band member playing a synth as well, Nicholas Millhiser and there was a live drummer, Jerry Fuchs. Singer Nancy Whang (who is also, not coincidentally, also in LCD Soundsystem) completes the lineup.

For the hour-long set, MacLean and his band went through a lot of the songs he’s become known for (from the 2005 album Less Than Human) like “Give Me Every Little Thing” and “Tito’s Way”. MacLean and Whang shared singing responsibilities, with her emotion and range making a nice contrast with MacLean’s robotic, Depeche Mode-like harmonies. The true showstopper was the final number, “Happy House”. The song was released in March as a single and is about 12 minutes long on record. Just as they were breaking into the final song, MacLean and Whang joked about not knowing the song and just winging it. They seemed to have a lot of fun playing that number more than any other. The song’s beat continuously built up and slowed down and seemed to blissfully go on forever. It almost certainly exceeded the running time of the recorded version of this song.

When the show started just moments before midnight, the band room was full but not packed and gave the big crowd room to dance. As the night wore on, the crowd thinned out but mostly because it was approaching 1am on a Wednesday night/Thursday morning.

One completely irrelevant note that is neither here nor there, but it struck me as interesting that MacLean has a striking, physical resemblance to a younger Bruce Willis and Willis’s most famous character is John McLane (from the Die Hard films).

About midway through “Happy House” I wrote in my notepad, “I hope there is no encore because this is the perfect way to end the night.” Although it was already late and probably way past my bed time, that didn’t matter during the hour that The Juan MacLean was on stage at Nectar. It was disappointing having to go back home and get ready for another day of work on little sleep. I do know that I didn’t mind or regret being so tired and dragging myself through another day of work. But it was great, escapist fun while it lasted.